I’ve been talking about the decade in retrospect all month long, so for one week (and one week only!), I’m going to leave the rest of the decade to fend for itself and talk instead about the highlights of 2009. These are the scifi movies I’ll remember, for good or ill. In no particular order:

Avatar
Wow, I could watch this movie every day. In order for this superexpensive, almost-all-CGI geekfest to succeed, James Cameron had to knock the cinematic ball out of the park — and that’s just what he did. On the one hand, this should come as no surprise; the dude’s been knocking the ball out of the park visually and technically since Aliens. On the other, when you’re as ambitious and spend as much money as Cameron is and does, sooner or later everyone expects you to face-plant. Well, haters, save your Schadenfreude and grind your teeth in anguish as Cameron delivers, spectacularly, again.

The question for Avatar now isn’t whether it will be a hit, but whether Cameron’s ambitions with the movie will be rewarded with Oscar nominations. I’m on record saying I didn’t expect a scifi movie to make the Best Picture slate this year, but I left myself an out by saying I hadn’t seen Avatar yet. I’m glad I did, because Avatar is exactly the sort of technical virtuoso act that makes it an easy pick for Best Picture, and Cameron himself a good shot for Best Director. Will it win? I don’t know, but if it’s not on the Oscar slate, there’s something very wrong.

Moon
What might kill Avatar’s chance at winning Best Picture is that its story is merely serviceable; typical of Cameron, but a liability nonetheless. For people who want actual storytelling in their scifi, the best movie of the year is Moon, a tiny flick made for about one percent of Avatar‘s budget. Moon dwells on the subject of identity and loss and is startlingly effective in its way, in no small part because of the performance of Sam Rockwell as the universe’s loneliest astronaut.

Moon and Avatar are fine examples of how science fiction got done in 2009, on both extremes of the filmmaking spectrum: one tiny, intimate, and about character and story; the other huge, crowd-pleasing, and about saturating your eyeballs to the point of overload. In many ways, they are complementary experiences. Which is better is a matter of personal taste. But each in its way is as good as scifi got this year. 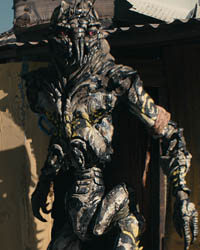 Somewhere in the middle of the above extremes falls this movie, about a forced alien-relocation project gone deeply awry, shot in faux-documentary style and by turns grubby, darkly humorous, and gleefully gruesome. Let me take a moment to note as a moviegoer that, in these days of overly calculated PG-13 filmmaking, it’s nice to see a smart scifi movie that’s unapologetically rated R. In the end, I think District 9 has been slightly overrated — the thing falls apart in the third act — but it’s still a kick and an excellent feature debut by director Neill Blomkamp.

Watchmen
This was the biggest disappointment of the year, not because it isn’t good — it’s fine — but because I think it missed being brilliant by a tiny margin, and that margin involves about six beats that could have been snipped out of nearly every scene. For the want of tighter editing, we would have had an undisputed classic, both in the science-fiction and the superhero genres. A genuine pity.

Star Trek
In many ways this movie represents the state of modern cinema, both as an art and as a business. It’s a clean, fast, competent installation of a franchise and genre so deeply ingrained in the audience’s neural pathways that it requires almost no effort to enjoy, served up with a script that hits the audience’s pleasure buttons and doesn’t require it to think. This is not a criticism; it’s an observation.

I have to admit that I’m simply fascinated with Star Trek — this particular movie, I mean — because it is so capable in every way it has to be (and not in any way it doesn’t — yes, I’m kvetching about red matter). I’ve watched and enjoyed the movie several times, but I’m not convinced there’s anything under its surface. And that’s the state of cinematic art in 2009.

Winner of the Hugo Award and the John W. Campbell Award for Best New Writer, John Scalzi is the author of The Rough Guide to Sci-Fi Movies and the novels Old Man’s War and Zoe’s Tale. He’s also Creative Consultant for the Stargate: Universe television series. His column appears every Thursday.