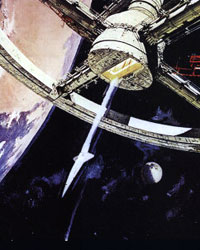 • Star Magazine claims Kirsten Dunst will be written out of the next Spider-Man movie to be replaced by Anne Hathaway. Ah, if only that were true.

• James Cameron thinks 3D is the next step, not just in cinema, but in home cinema. I don’t know about that: Avatar was fun in IMAX 3D, but hardly an earth-shattering experience, and certainly not worth buying a new television over.

• Was the author of 2001: A Space Odyssey an amateurish writer? I’ve always thought so — Clarke is practically unreadable — so it’s nice to see that Robert Silverberg agrees.

• A bunch of synchronized robots in a dance troupe wish you a Merry Christmas.

• SF Signal hosts the latest part of their end-of-the-year Mind Meld on the best scifi of the year.