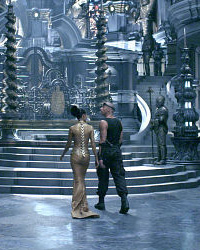 • Slice of SciFi reviews the next Doctor Who special, “The Waters of Mars.” Looks like it’s a fitting end to Tennenbaum’s Doctor.

• Against all odds, Zack Snyder’s 300 looks like it’s about to get a prequel called Xerxes, courtesy of the much discredited Frank Miller.

• Ridley Scott’s protegee Carrl Erik Rinsch is now slated to direct the Creature From the Black Lagoon remake. Be still, my gills.

• It’s just about that time, so io9 posts their very debatable list of the greatest science fiction films of the past decade.

• Meanwhile, back on Earth, Topless Robot lists the ten most notable Alien rip-offs. I’d never really considered Pitch Black an Alien homage, I have to say.

• Despite being a companion, Catherine Tate doesn’t know anything about Doctor Who.