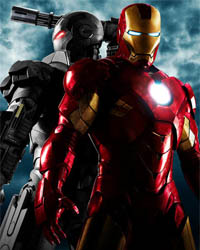 • Disney’s not going to stop at remaking just one of its ’80s scifi classics: the Tron: Legacy team is also working on a remake of Black Hole.

• Pride and Prejudice and Zombies will be adapted into a six-part miniseries, possibly on the BBC.

• Iron Man 2 gets a teaser poster, with the first really good look at War Machine’s armor.

• Although Torchwood got something of a raw deal last series, the fourth series will have a full 13 episodes according to star John Barrowman.

• Harlan Ellison is offering to write the next Star Trek movie. Given his litigious nature, I wouldn’t be surprised if J.J. Abrams passes.

• There are now nine separate Hulks running around in Marvel’s Hulk Comic, including three Hulks who are children of the original. io9 explains the madness.