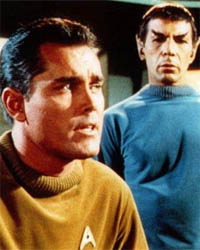 • Stephen King is getting another television miniseries, in the form of an adaptation of his Colorado Kid, which involves the supernaturally exiled living in Maine.

• Smallville’s Justice Society gets a sneak peak, and Hawkman, Doctor Fate and Stargirl all look great.

• The first set shot of the Predator homeworld is revealed, and at the risk of paraphrasing an overworn t-shirt, it looks gorges.

• Just like Peter Jackson did with Neill Blomkamp, Sam Raimi intends to play industry mentor to Uruguayan director Federico Alvarez for a movie about giant robots.

• For the first time ever, Star Trek’s original pilot is being released, featuring a very different look at the nascent Federation.

• Want to know when David Tennant’s Doctor Who dies? Consider it January 1st, 2010.