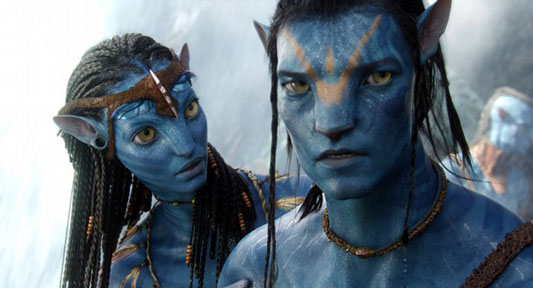 It’s a sad fact that most science fiction about extraterrestrial life — even very good science fiction – is not truly interested in the awe of walking on another world. Terror is easier to evoke, and hordes of reptilian invaders sell more tickets than an alien planet. The most extraordinary thing about Avatar is the way James Cameron found a way to feed this fascination with the otherworldly (something he has actually been indulging for years with documentaries exploring the deep sea) while emphatically and masterfully giving the people what they want.

Cameron spent unspeakable amounts of money and a good half-decade of labor to render Pandora (the planet on which 100% of Avatar takes place) in brilliant, photorealistic splendor. It’s a fascinating locale. Much of its surface is covered by something resembling rainforest, though the flora is not as similar to ours as it might seem at first glance. Intelligent, humanoid inhabitants — a good two feet taller than us, blue, impossibly agile — have evolved along with all manner of creatures great and small, most of which appear to breathe through gill-like slits in their necks rather than through their mouths.

For the first ninety minutes or so, we explore Pandora along with a team of two scientists and a crippled ex-Marine (Sigourney Weaver, Joel David Moore and Sam Worthington), who roam the planet using remote-controlled bodies, cloned from a combination of human and indigenous DNA — the “avatars” of the title. (The planet’s atmosphere is, as one might expect, not friendly to our lungs.) Their amazement is equal to ours. Eventually, Worthington’s Jake Sully, or his avatar, is separated from the rest of the team and adopted by a skeptical but not inhospitable clan of natives (“Na’vi”), among them a dead sexy warrior (Zoe Saldana) who teaches Sully the ways of her people. Those ways seem mystical at first — tree-worship, praying to ancestors — but turn out to have an intimate and very real connection to the strange world they inhabit.

That’s half the movie, give or take. The other half is an intense action thriller that recalls Cameron’s legendary work on Aliens and Terminator 2: Judgment Day. You see, Pandora is rich in Unobtainium — some sort of valuable mineral that remains, as its name implies, a MacGuffin. And the largest deposit of Unobtainium is located precisely where the Na’vi call home, which means that the humans are hell-bent on driving them out. Sully, of course, casts his lot with the natives.

The final third of Avatar is an epic, unremitting thrill ride, directed with the masterful lucidity and pacing that makes Cameron the never-dethroned king of action. And it must be said that his much-hyped method of performance-capture animation inserted into a fully computer-generated, 3D universe turns out to be a thing of beauty. The expectations were too absurdly high for anything but the Second Coming to meet them, but Avatar is revolutionary at least in this way: It is the most convincingly realized artificial world ever created from scratch for the screen. It’s a movie to luxuriate in.

I can’t get away without mentioning the politics, which are glaringly obvious and as strident as in any Hollywood blockbuster I’ve ever seen. Beyond the humans-as-hostile-invaders angle, Cameron draws blatant parallels to current events. You can probably guess what they are, and I’m not sure I can add much to the discussion; you either go in for this sort of standard-issue liberal subtext, or you don’t. The target is an easy one, and Cameron has no trenchant insights, though I was impressed with his sheer aggressiveness. This one will draw outrage from the expected sources.

The inevitable controversy, though, will be a pointless distraction. Avatar is as spectacular as you could hope for: a killer action flick, and a visionary achievement in world-building. Every penny of that $250 million budget and every second of that four-year production is up there on the screen. All of Hollywood promises, but James Cameron delivers.

To get an alternate movie review of Avatar, go to AMC Filmcritic.com