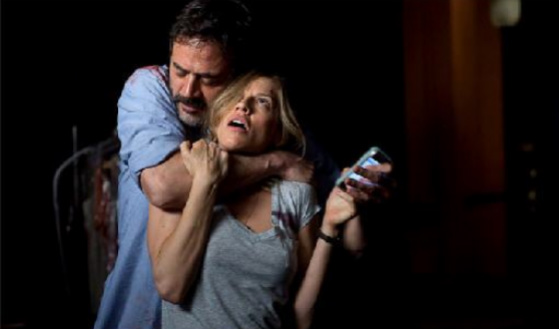 If horror history had a sitting king, it would be the indomitable Christopher Lee, whose visage graced so many movies produced by Hammer Films, the British studio that made lavish productions like Blood of Dracula and Horror of Frankenstein while operating on the shoestringiest of budgets. (The fact that Lee was recently knighted only lends additional gravitas.) And now, thanks to the recent news that the revered studio is getting back into the horror game — so helpfully chronicled by AMC’s own Scott Sigler — Internet obsessives have been monitoring the studio’s renaissance with a sense of guarded optimism. Guarded because, well, Hammer hasn’t really done anything yet.

But this could be the week that everything changes! Thanks to the batch of photos the studio released for its first new feature, The Resident, both Hammer and Lee have been lighting up the blogosphere (and the world at large) in a major way…

To recap the events leading up to this near-miraculous resurrection, let’s go back to back May 2007, when Variety first reported the purchase of Hammer Films and the fact that the new Dutch owners were planning to kick off production on new movies post-haste. “Hammer Horror Returns in a Big Way, Return of British Horror!” trumpeted BloodyDisgusting. “Hammer Films Lives Again!” chimed in ShockTilYouDrop — though they tacked on the codicil, “Every so often we hear of such efforts to breathe new life into the studio that brought us colorful, bloody new takes on Dracula and Frankenstein and originals such as The Reptile and Plague of the Zombies, but nothing comes to fruition.”

Fears that this was just one more heart-breaking false alarm were somewhat allayed when Hammer announced its first round of releases: The Web series Beyond the Rave; the controversial, Matt Reeves-helmed remake of Let the Right One In, and The Resident, a psychological thriller about a doctor, her new loft apartment and her creepy landlord. That last has stirred up the most attention so far. First, Hilary Swank signed on to star, evoking such comments as “Let’s hope for the inclusion of such Hammer essentials as white nighties and gauzey [sic] curtains blowing in the wind…” Watchmen‘s Jeffrey Dean Morgan (he played The Comedian) signed on shortly after. The most recent and biggest news (at least in the world of horror fandom) came from Bloody Disgusting: Christopher Lee himself! had joined the cast. The crowd went predictably wild.

And now the first batch of photos is online, and movie bloggers’ passions have been ignited anew. “The revival is among us!” reports BloodyDisgusting, “And Hammer Films is about to be fully rejuvenated with The Resident.” “So the images do little more than prove the film exists,” admits Movie-Moron, “But I think this film’s got potential, and the revival of Hammer has got be a good thing for the British film industry and cinema as a whole.” Meanwhile, in a post titled, “Hammer These Shots Into Your Head!,” WeAreMovieGeeks gloats, “There are a number of reasons to be ecstatic about the upcoming thriller, The Resident…” before going on to cite the “stellar cast” and the fact that “Hammer is a brand unto itself in terms of stylistic and unforgettable horror.” “I’m getting excited for Hammer Films’ return, even just from looking at these two photos,” agrees FirstShowing.

All true, all true. Of course, the real test of the new Hammer Films will come when The Resident is finally released in 2010. Will you be watching or retreating into your collection of vintage Hammer greats?