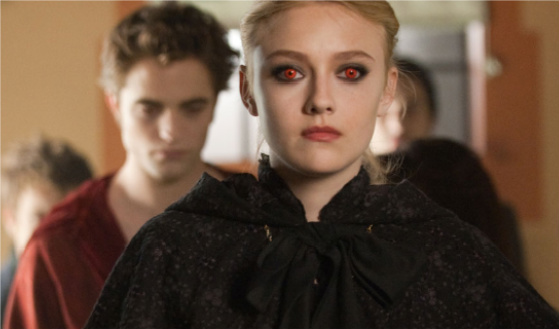 The Twilight Saga: New Moon hits the ground running, secure in the knowledge that Twi-hard fans are in the house and don’t need to be brought up to speed.

It’s moody high school senior Bella Swan’s (Kristen Stewart) 18th birthday, and she’s in a funk. Where other girls would be kicking up their heels at having achieved legal majority, Bella is torturing herself with dreams in which she’s a withered old hag, standing hand in hand with her preternaturally beautiful boyfriend, Edward (Robert Pattinson). After all, she’s a now officially a whole year older than he is. In Bella’s defense, a morbid preoccupation with aging comes with dating a 109-year-old vampire who’s forever 17, the age at which Edward died and was reborn into undeath.

But the worst is yet to come: At a party thrown by Edward’s “family” of good vampires (good as in, they refrain from drinking human blood) — parents Carlisle and Esme Cullen (Peter Facinelli, Elizabeth Reaser), siblings Alice (Ashley Greene), Emmett (Kellan Lutz), Rosalie (Nikki Reed) and Jasper (Jackson Rathbone) — Bella cuts her finger and triggers a brief flare-up of Jasper’s perilously suppressed blood lust. It’s over in a moment, but Edward sees the writing on the wall: As long as Bella hangs with vampires, she’s in mortal danger. Since he’s not willing to bear the responsibility of making her into a monster, Edward instead opts to break her heart.

It’s time for the Cullens to move on anyway — if the locals haven’t yet noticed that Carlisle looks at least a decade younger than he claims to be, they soon will. And even if they chalk up his youthful appearance to spectacularly good genes, they’re going to have to start wondering why their teens are maturing into solid adults while his remain willowy and dewy-skinned adolescents. With Edward gone, Bella sulks and rages, eventually emerging from her funk to renew her childhood friendship with Jacob (Taylor Lautner), a member of Washington state’s indigenous Quileute tribe. Any adult would see in an instant that Jacob is smitten with Bella. Her bone-headed obliviousness — to Jacob’s “more than friends” longings and to the fact that he’s a werewolf — is just another sign of her voluptuous anguish.

You’d never know Twilight and New Moon had different directors (Chris Weitz replaced Catherine Hardwicke), and that’s a good thing: The authorial voice belongs to novelist Stephenie Meyer, and in both movies the book-to-screenplay changes amount to little more than tweaks. What matters is casting and the tone, both of which are eminently true to Meyer’s vision.

That said, New Moon has the feel of a placeholder — most of the supporting characters get shockingly short shrift, starting with clan Cullen; if you didn’t come in knowing their complex relationships and back stories, you won’t figure them out from New Moon. Michael Sheen, who made his werewolf bones in the Underworld movies, has a fine old time playing Aro, the self-consciously supercilious upholder of traditional monster values, but Dakota Fanning is conspicuously underused as the deceptively fresh-faced Jane, who appears destined for bigger and badder things somewhere down the moonlit line.

Worse, the CGI werewolves are a flat-out disaster; no matter how much care went into researching the lay of lupine fur and the ripple of predatory muscle, they look profoundly fake, without substance or menace. Suspension of disbelief is a prerequisite for all supernatural tales, but misapplied CGI is a big time illusion-buster. Mock Twilight‘s sparkly vampire-skin effects all you want: At least there’s real flesh under the glitter. New Moon‘s faux wolves are deal breakers for all but the Twi-hards who, like Bella, have mastered the art of willing themselves to see only what they want to see.