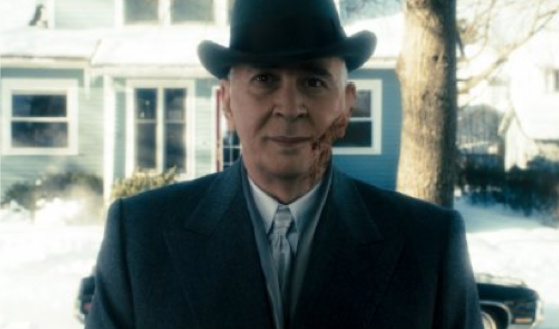 Richard Matheson’s short story “Button, Button” is just the jumping off point for Richard Kelly’s The Box, a convoluted moral thriller that gets off to a terrifically eerie start but collapses beneath the weight of its Big Ideas.

But scratch the surface and the picture changes: Arthur’s application to the astronaut program has been rejected, apparently because he flunked the psych exam. They can’t afford corrective surgery for Norma, who suffered a painful and disfiguring foot injury as a teenager, and Libby Hill just eliminated the staff discount that allows the Lewises to send Walter to an elite school they could never otherwise afford. And then there’s the box.

Delivered to their door at the crack of dawn, the box looks like a gag gift: A wooden cube topped by a gigantic red button beneath a glass dome that cries out for a label reading “Panic Button” or “Break glass in case of drunken emergency.” But the giver, the elegant and horribly deformed Arlington Steward (Frank Langella), who comes by later that day to “clarify” matters, assures Norma that the box is no joke. If she decides to push the button — a decision she may discuss with her husband, but no one else — two things will happen: The Lewises will be a million dollars richer… and a stranger will die. The offer expires in 24 hours.

That’s the epitome of a terrific short-story premise, and a short story is exactly what Matheson’s “Button, Button” was: Published in Playboy in 1970, it was later turned into an episode of the short-lived ’80s incarnation of The Twilight Zone. Director Kelly’s decision to expand the idea to feature length required major rewriting, some of which — primarily the material drawn from Kelly’s own childhood — is genuinely haunting. But the more specific The Box becomes about Steward’s background and intentions, the more it resembles an eighth-season episode of The X-Files: Too many black ops, shadow agencies and conspiracy arcana (you do know that Viking Orbiter 1 sent back the “Face on Mars” photos, right?), too little of the heart-wrenching sense of alienation that made Kelly’s Donnie Darko a cult hit. Make no mistake, The Box is never dull or stupid, which is more than can be said for most genre movies. It’s only disappointing because its reach exceeds its grasp.

Click here to read an interview with director Richard Kelly.