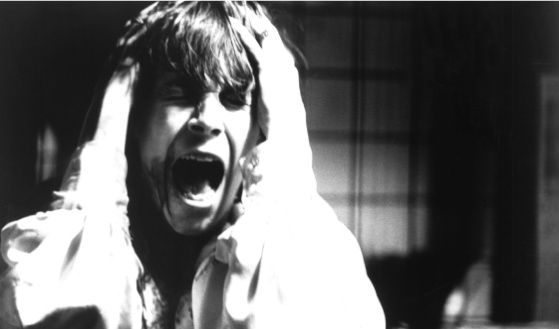 I don’t hide the fact that I’m a big fan of the oft-maligned slasher film. Sure, they’re awfully formulaic, especially the old school slashers. But that’s part of the fun. The killers always have some big story, usually involving a holiday prank gone awry and a subsequent stay at a mental hospital. When they get their killin’ on, they sport some neat outfit (sometimes with a sweet mask) and almost always adopt a signature weapon.

In the interests of horror and science, I thought I’d break down a few of these slasher-flick psychos for easy reference. Oh, and just so you’re prepared, some of these dudes (and dudettes) have quite the convoluted history, in some cases laid out over the course of decades and countless sequels, prequels, reboots, remakes and reimaginings… you try untangling Michael Myers’ story. My solution was to go back to the beginning and explore their earliest origins, leaving the remakes at the side of the road for now.

Real name: Jason Voorhees
Alias: None
Appears in: Friday the 13th 1 through 8, Friday the 13th (2009), Jason Goes to Hell, Jason X, Freddy vs. Jason
Area of operation: Camp Crystal Lake (aka Camp Forest Green); Manhattan; outer space
Weapon of choice: Machete, spear, fists, sleeping bag… whatever’s handy
Distinguishing features/ensemble: Pillowcase mask, hockey mask, gooey face.
History:
Once upon a time, a simple boy named Jason drowned in Crystal Lake
while inattentive camp counselors were off having sexytimes. Or maybe
he didn’t drown after all. Whatever the case, Jason went on to live in
the surrounding woods, killing countless innocents as some sort of
misguided revenge for both his mistreatment and the beheading of his
murderous, much-loved mommy. After being killed and resurrected
numerous times, Voorhees was cryogenically frozen for study by the U.S.
government, only to be thawed out 450 years later.

Real name: Michael Myers
Alias: The Shape, The Bogeyman
Appears in: Halloween 1 and 2, 4 through 6, Halloween H20, Halloween: Resurrection, Halloween 2007, Halloween II (2009)
Area of operation: Haddonfield, IL
Weapon of choice: Butcher knife
Distinguishing features/ensemble: Overalls, white mask with brown hair (vaguely resembling William Shatner)
History: As a lad of six, Michael Myers stabbed his sister Judith to death on Halloween night. He was sent to Smith’s Grove Sanitarium, where he remained until he was 21, at which point he escaped and returned to Haddonfield in order to kill babysitters reminiscent of Judith. One turned out to be his younger sister, Laurie Strode, who was unaware of the connection. A comatose Myers was captured before he could kill Strode, and was remanded to Ridgemont Federal Sanitarium. He escaped again and returned to Haddonfield to kill Strode’s daughter, Jamie Lloyd… or maybe, Jamie never existed. Michael Myers then vanished, only to resurface 20 years later, determined to kill Laurie Strode once and for all.

Distinguishing features/ensemble: Fedora, red and green striped sweater, disfiguring burns all over body and face
History: Born of a nun raped by 100 maniacs, Freddy Krueger grew up to be a child murderer, killing more than twenty kids. He was caught and tried for his crimes, but freed on a technicality; the parents of Springwood partook in vigilante justice, setting Krueger on fire in his own death dungeon. Though he died, Krueger’s soul lived on and he continued to murder the children of Springwood from the realm of dreams.

Real name: Harry Warden
Alias: None
Appears in: My Bloody Valentine (1981) and My Bloody Valentine (2009)
Area of operation: Valentine Bluffs
Weapon of choice: Pickaxe
Distinguishing features/ensemble: Miner’s gear, including headlamp and gas mask
History: A mine explosion during a Valentine’s Day dance trapped a group of workers underground. One of the men, Harry Warden, was finally rescued weeks later; he’d gone mad, having survived by resorting to cannibalism. Warden spent the next year in a mental hospital and upon release, killed the supervisors responsible for the accident. Warden warned that if the town ever resumed celebrating Valentine’s Day, he’d kill again.

Real name: Kenny Hampson
Alias: None
Appears in: Terror Train
Area of operation: Said train, rented for a private party
Weapon of choice: Knife
Distinguishing features/ensemble: Lizard mask, Groucho mask, old man mask, drag
History: During a New Year’s Eve party, college student Kenny Hampson is lured into bed with a medical cadaver as part of a cruel prank. Kenny ends up in a psych ward. Three years later, he poses as a magician’s female assistant and boards a graduation party train to exact revenge on the students traumatized him.

Real name: Billy (?)
Alias: None
Appears in: Black Christmas (1974) and Black Christmas (2006)
Area of operation: Pi Kappa Sigma sorority house
Weapon of choice: Plastic bag, glass unicorn
Distinguishing features/ensemble: Has at least one eye, able to speak in many voices
History: Just before Christmas break, an unseen psycho climbs up a trellis and enters a second-floor window of the Pi Kappa Sig house. He camps out in the attic but ventures out to the house mother’s room, where he uses her phone to call the line used by the sorority sisters. He harasses them with obscene calls, speaking enigmatically about “Billy” and “Agnes,” who have done something with a baby. No one has even found out exactly who — or where — this killer really is.

Real name: Peter Baker
Alias: Angela Baker
Appears in: Sleepaway Camp 1 through 3, Return to Sleepaway Camp
Area of operation: Camp Arawak, Camp Rolling Hills (aka Camp New Horizons)
Weapon of choice: Anything at all: lawn mower, beehive, chainsaw, pot of boiling water…
Distinguishing features/ensemble: Penis
History: A motorboat accident claimed the lives of Angela Baker and her father; Angela’s brother Peter survived and was sent to live with his deranged Aunt Martha. Martha, who already had a son, forced Peter to live his life as Angela; he eventually had a mental breakdown and (as Angela) killed several people whilst at summer camp. He was then sent to an insane asylum and, as part of therapy, underwent gender reassignment surgery and became Angela; this in no way cured his mental illness. Angela became a counselor at Camp Rolling Hills, only to resume her murderous ways when it became clear that the foul-mouthed, drinking, drugging, fornicating teen campers could not live up to her exacting standards.

If there’s one thing I’ve learned from compiling this guide, it’s that nicknames are in short supply in slasher movies. Sure, there’s “The Springwood Slasher,” but what else? Can’t we call Jason “Melty Face” or something? Oh, wait… that’s not scary at all. Hmm. I think this calls for more scientific research… and horror movie watching.