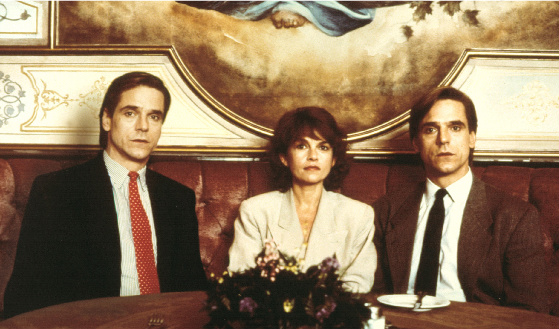 I’m an only child. Growing up, I often wondered what it would be like to have siblings. Would we get along or would we hate each other? But my pining for a sister or brother never extended to a desire to be a twin… especially an identical twin. I’m probably a little too “I’m my own person!” for my own good; just meeting someone with my first name is enough to get me sizing up the “competition” (what, this weirdness shocks you?).

And twins, man! Horror movies have once again informed my world view, which is this: If you’ve got identical twins, then one — if not both — is bound to be evil. Don’t believe me? And here’s the scientific… well, err, the cinematic proof.

Basket Case
You can’t blame Belial for being angry… he got the serious short end of the conjoined twin stick. His brother Duane may be socially inept, but otherwise he’s an average young man. Belial, on the other hand, is dwarfed and monstrously deformed. But brothers are brothers, and these brothers are with each other to the end: Duane totes Belial around in a basket as the two seek vengeance on the doctors who separated them against their will. Basket Case features puppets, stop-motion animation and New York City in its seedy heyday, all courtesy of the twisted mind of writer/director Frank Henenlotter. A cult classic before it was even made!

Dead Ringers
The only way to describe Dead Ringers
is, “a David Cronenberg movie featuring identical twin
gynecologists.” That may be the most vanilla summation ever, but if you’re familiar with Cronenberg’s work (particularly from the late 1970s and early ’80s), you know what you’re in
for: Body horror and identity crises that leave you fairly nauseated as you question
reality and sexual politics. Hooray!

The Inititation
If I were to say, “The Initiation
is an early ’80s slasher film starring Daphne Zuniga as a pair of
identical twins, one of whom is totally crazy and evil and most of the action
takes place in a mall,” how would you react? Would you say
“Ugh, sounds terrible!” and run the other way? That may be the smart
choice. But if you’re me, that premise sounds so delicious that you
run straight toward The Inititation, arms outstretched, declaring undying love and offering marriage proposals. Diff’rent strokes and
all, I guess.

Sisters
Like Dead Ringers, Sisters is
vaguely based on reality. Cronenberg was inspired by the case of a
real-life pair of drug-addled NYC doctors, while De Palma was struck by a
photograph of Russian conjoined twins; one apparently looked serene, while the other appeared a bit disturbed. And voila: Sisters. The movie, which features De Palma’s typical
Hitchcockian touches, eventually descends into a confusing jumble that doesn’t
quite live up to the promise of the first 70 minutes. But when you’re
watching a stylish thriller starring Margot Kidder as separated Siamese twins, one of whom gets stabby when she’s piqued, well, who really cares?

Twins of Evil
The third movie in Hammer‘s Karnstein Trilogy, Twins of Evil is loosely based on J. Sheridan Le Fanu’s Carmilla
but adds a dash of Satanism and witchcraft to the lesbian vampire stew.
Twin girls, one a vampire, one a pious innocent… chances are they
won’t be wearing each other’s clothes.

No talk of horror-movie twins would be complete without the Grady sisters from Stanley Kubrick’s The Shining —
you know, the sublimely eerie girls who haunt the hallways of the
Overlook Hotel, imploring young Danny to come and play with them
forever and ever. They’re a highlight of one of the most amazing genre
films ever made. But are they actually twins? The debate has been
raging in my head forever. They dress alike, style their hair alike
and look alike, so everyone assumes they’re twins… but during Jack’s interview for
the caretaker position, the hotel manager relates the sordid tale of
former caretaker Charles Grady, who hacked p his family up with an
axe, and says the daughters were “about eight and ten.” Sisters yes, twins, no. This doesn’t take away from their
creepiness, however: Sisters who are two years apart who dress identically are way creepier than twins who do the same.

It’s no wonder
that twins are a favorite with the horror crowd — other twin features include The Other and Just Before Dawn — because there’s a lot to
explore there in terms of psychology and the nature of evil, grounds
ripe for the picking in the genre. However, if you’ll excuse me, I
think I need to call my parents to thank them for having me — and only
me.