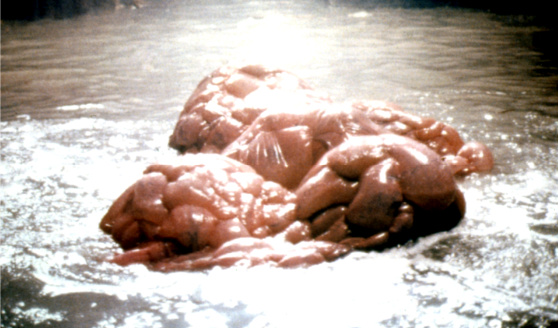 The Blob (Cranberry Sauce)
Come on, is there anything more horrifying than the bloody, gelatinous mass that comes first out of a can, then several hours later rockets out of a certain bodily orifice? Yes — when that goo gains mobility and goes on a killing rampage. Steve McQueen rocked the original, and I defy you — yes, defy you — to tell me that monster is not made out of holiday sauce. The 1988 remake ratchets up the gore factor about 100 times more, but their killer monster looks like pearlescent pink shampoo and dammit, that’s just not as scary. Yes, I am more frightened of dinner killing me back than I am of dying from shampoo. Don’t you dare judge me.
• Click here to see the killer cranberry sauce for yourself!

ThanksKilling (Turkey)
I have to say that the main course looks absolutely delicious. By “delicious” I mean the way it looks tasty when your dog sicks up on the carpet and then immediately licks it up (dogs are just crazy, ain’t they?). Thank the powers that be for indie movies, because I just had to see this made-of-holy-crap-it’s-going-to-rock flick that features a wisecracking killer turkey puppet. Let me repeat: A wisecracking killer turkey puppet. Clearly, this one is destined for the kind of fame usually reserved for anthropomorphic cookies (see below). And when you’re talking fomemorable one-liners, can anything top “Gobble-gobble, motherf—r”? I don’t think so.
• Click here to see the killer turkey (and say “no frickin’ way” as you do)
• Click here to see the ThanksKilling Myspace page (again, no frickin’ way, dude!)

Pumpkinhead, Demon of Revenge (Pumpkin Pie)
I feel this is one of the most underrated horror flicks of all time. Stan Winston’s special effects make for a bitchin’ monster, and Lance Henricksen kills as the grieving backwoods father who seeks vengeance against them city kids who kilt his kin. The monster looks kick-ass, the atmosphere is creepy as hell and it truly is the Citizen Kane of Appalachian monster movies. I’m not kidding — it’s damned good. For some reason, it’s been lost in the sands of time and seems to get no love from aficionados. And yeah, the monster actually comes from a pumpkin patch, so this is Thanksgiving-centric as it gets (OK, not as much as Thankskilling, but what could be?).
• Click here to see scenes of the killer pumpkin(head)

Gingerdead Man (Gingerbread Cookies)
So gingerbread cookies are a half-Thanksgiving, half-Christmas kind of thing, but screw you and your Martha Stewart-induced protocols: It’s a holiday food so let’s have at it. I’m a fan of Gary Busey, be it in his sane mode or his crazy mode, and this schlock-fest horror is the icing on his wacky cake. And by “icing,” I mean the silly white smile and evil black eyes you paint on a killer cookie possessed by the spirit of a mass murderer.
• Click here to see the killer cookie do his thing

Diner Is Served?
Come on, Dear Reader, what am I missing? I could find nothing for yams, green bean casserole or mashed po-taters. If you can add to the menu, please do so in the comments. And happy Thanksgiving, y’all!

Don’t agree with what Scott says in this blog? That’s okay, he doesn’t like you anyway. That one time you accidentally drank the sour milk? Yeah, that was him exercising his evil mind control. Watch your ass, pal, because there’s more where that came from.