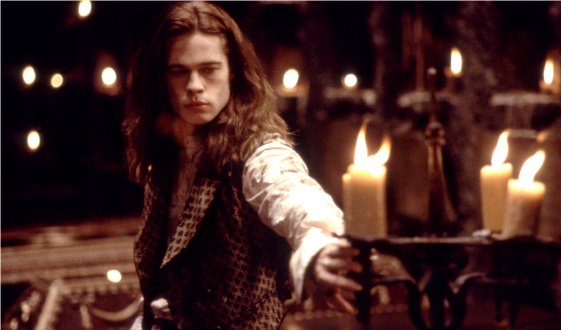 I’ve decided I can completely ignore everything my parents ever taught me. Why should I bother with their boring advice when Hollywood gives me all I need to know? Stupid horror teens imparted many lessons about life, as did those ever-so-reliable monster hunters with their timeless wisdom. But for the more esoteric subtleties, you really must sample the tidbits of insight offered by the ultimate icon of horror movies — the vampire.

Blood Is Thicker than Water
Every family has an idiot. If you can’t think of anyone in your family who’s an idiot, then guess what? That’s right: It’s you, because every family has an idiot. And yet that idiot is still family, so you have to go to bat for them, even if they get mixed up with the wrong people. And yeah, that includes the wrong undead people — just ask poor Seth Gecko in From Dusk Till Dawn. His brother Richard takes him into the mouth of Hell, and Seth goes to bat for him. You can’t always save your idiot relative, but dammit, you gotta try, because blood is thicker than water (and apparently much tastier).

Always Look Fabulous!
Why are all vamps dressed so dang well? Apparently there’s no excuse for not looking sharp, and that includes being dead. What’s up with that, Interview with a Vampire peeps? And what’s with the leather body suits, Underworlders? And do you even need to look beyond Bela Lugosi in the original Dracula to see the devastating effect of a sharp-dressed man? Sure, vampires may rip the throats out of their victims and bathe in blood, but I think it’s clear they’re always wearing clean underwear. Their vamp moms should be so proud!

Keep It in Your Pants
The moral compasses of religion and culture have long sounded out a constant drone — bad things happen when you do bad things. Just ask poor Caleb Colton from Near Dark: Stay away from the hottie stranger equals don’t get bitten on the neck equals don’t turn into a vamp. Simple. And don’t even get me started on Buffy the Vampire Slayer. Teen sex is bad, mmmmm-kay? Comedies don’t offer any alternative advice, as Once Bitten demonstrates. Just live the chaste life of the pure, and it will all work out! Remember kids: There is no condom that protects against vampirism.

Genetics Is for Suckers
Science is taking a big kick in the nuts in today’s America, where only 39 percent of citizens believe in evolution. So in this sea of ignorance, why not float seriously wacky genetics and create vampire half-breeds? Sometimes vamps are created via virus, sometimes via mom’s genes, sometimes via the supernatural, and sometimes via whatever sparkly crap they put in the Jello in Forks, Washington (that’s the home of Twilight, folks). The most famous half-vamp is Blade (moms was human, pops was a vamp, so this one is genetic), but he’s not alone. There’s that BloodRayne babe (a demon-based half-vamp, but it’s kind of hard to tell), along with Saya from Blood: The Last Vampire (400 years old and a half-vamp, we never really understand why). You can get vamped just from hanging out around the bloodsuckers, like Darren in Cirque du Freak. Yes, he becomes a half-vamp not via genetics or anything mystical, more like a union apprenticeship — hey, don’t judge.

Don’t Live in Alaska
This has nothing to do with a rogue ex-governor (see what I did there? “Rogue?” The name of Sara Palin’s book? That’s why they pay me the big bucks, folks…). Seriously, though, why would you move to place where the sun doesn’t shine? No, not where your older brother once told you to “stick it.” Literally, a place where the sun doesn’t shine for two months at a time. Vampires come out at night, so a place with no day? You get 30 Days of Night, folks. Use common sense and just move to the Sunshine State instead.

Vamp-Frickin’-tastic!
So there you are, Dear Reader, more valuable life lessons provided by the tireless font of wisdom that is Hollywood and served up by those demonic bloodsuckers known as the vampires. What life lessons have you gleaned from the creatures of the night? Leave a comment and let us know.