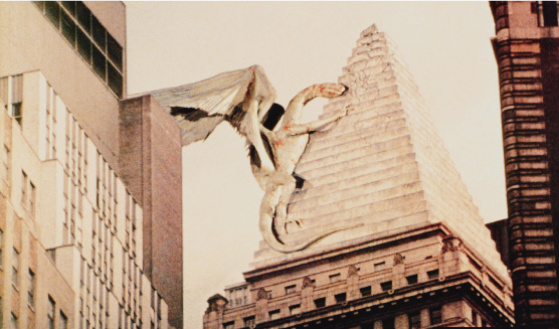 There are few things more fun than a Top Ten list. We do them all the time here at AMCtv, and hell, for awhile Top Tens and countdowns made up 95 percent of the programming on VH1. I’ve done several such lists myself, for things like The Top Ten High School Horror and Top Ten Sorority Horror Movies.

So when I had the idea to do a list for mythological monsters, it seemed like a winner. Except for one thing — those pesky words “Top” and “Ten.” “Top,” you see, insinuates a certain minimal level of quality; it says you are looking at the best movies a genre has to offer. “Ten” indicates you have that many worth examining. Sadly, in no way, shape or form can I apply either word to this list of mythological monster movies. Yes, there are ten but only six are worth discussing and even those are pretty bad.

What should have been riveting icons of terror is now fodder for wasted-budget flicks trying to cash in on nothing but a known name. (I wouldn’t call them “low” budget, per se; some had decent budgets, but the money was spent in unfathomable ways.) Read at your own risk: It’s not pretty.

The Movie: Q
The Myth: Basically, a dragon, sans all that fire-breathing silliness. It seems dang near every ancient culture has a legend about a winged serpent, a fact Q incorporates as evidence that big-ass lizard-thingies once roamed the Earth. Roamed, and munched on people, that is. What else is it going to do? Shoot some video for YouTube?
The Legend: If I had made this a Top 10 list, Q would have been number one. If you take into account it was made in 1982 (and bear with the FX accordingly), it’s a solid creature feature. David Carradine gets his monster-stomping resume entry courtesy of this flick, and the scenes of random body parts raining down on New Yorkers are priceless.
Snarkiest line from IMDb reviews: “New York is menaced by a plasticine monster, a terrible script… and has only David Carradine and Richard Roundtree doing dubious tough-guy acts to defend it.”

The Movie: Harpies
The Myth: A harpy is a ravenous monster with a woman’s head on a bird’s body.
The Legend: This Stan Lee-produced movie should have been good, because A) it had Stan Lee, and B) it had harpies, which are nasty pieces of work. Perhaps the term “produced” was used loosely… now that I think about it, the term “movie” was also used loosely. Avoid at all costs, even if it means chewing off your own leg to get away before seeing it.
Snarkiest line from IMDb reviews: “This is what Stephen Baldwin is reduced to? Even the reality shows seem good compared to this.”

The Movie: Wyvern
The Myth: A wyvern is a dragon that doesn’t breathe fire. Don’t worry, it still eats people like crazy.
The Legend: This is a solid entry for a TV movie — good creature design, good CGI, just plane chompin’ fun. Global warming melts polar ice caps, which unleashes a hibernating wyvern on a small Alaskan town. People get eaten, but a nomadic truck driver comes to the rescue. Overall, better than most on this list … granted, it’s a short list full of less-than-stellar movies, so take that at face value.
Snarkiest line from IMDb reviews: “Wyvern isn’t going to win over anyone looking for a light romantic comedy.”

The Movie: Manticore
The Myth: Manticores have a man’s head (with horns), a lion’s body and the tail of a dragon — or, if it’s having an identity crisis, the tail of a scorpion.
The Legend: A terrorist revives a manticore, so U.S. soldiers in Iraq have to whup ass and take names. Flag-waving fun for all, unless you actually like halfway decent special effects, in which case it’s not really that much fun at all.
Snarkiest line from IMDb reviews: “It’s a good thing we went in to liberate Iraq, because Saddam Hussein might have unleashed the manticore on New England if we hadn’t.“

The Movie: Hydra
The Myth:The hydra is a fat dragon with nine heads. Why nine heads? Because if you cut one off, two grow back in its place.
The Legend: Take Surviving the Game, add in a nine-headed mythological bad-ass, and you get the idea. If you go in expecting the Citizen Kane of nine-headed monster movies, you’ll be disappointed. If you just want your 90 minutes of passable creature-feature action, it’s not half-bad.
Snarkiest line from IMDb reviews: “This Hydra is a killing machine … no f—ing around.”

The Movie: Cerberus
The Myth: Cerberus was the three-headed dog that guarded the entrance to hell. Why anyone would want to break into hell, I can’t say, but if I wanted to keep those people out, a three-headed dog beats an ADT-monitored motion detector hands down.
The Legend: Note to self: When engaging in a life of artifact thievery, do not steal the breast plate of Atilla the Hun. Doing so will send you down a path where a three-headed hell dog will kill you and stuff.
Snarkiest line from IMDb reviews: “When people lost limbs, it reminded me of the bridge scene between King Arthur and the Knight from Monty Python and the Holy Grail.”

Ne Nuntium Necare
Look, don’t blame me for bringing these flicks up — I’m just the messenger here. And as long kids who got hopelessly hooked on Greek mythology keep growing up to be moviemakers, there’s hope: The big-budget remake of Clash of the Titans – the original mythological monster mash – promises a brave new world of gods and sweet monsters. Check out the trailer online if you want to see some serious harpies and gorgons.

Do you have any thoughts about these mythological monster movies, or on others I may have missed? Leave a comment, and let me know what you think.