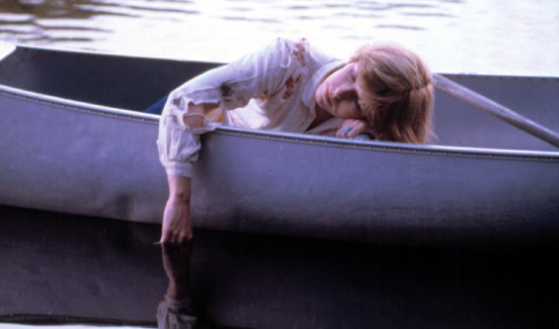 When I mention the trite phrase that horror movies are horribly sexist, I bet some female readers of this column shout an instant, fist-pumping “Preach on!” When I clarify that horror movies are horribly sexist against men, that’s when those same ladies decide that this preacher actually spews misogynistic lies. The prevailing belief is that horror flicks are sexist and that the targets are women. But if you do the basic math, the sexism is against men.

Let’s look at this from a scientific perspective, and by “scientific” I mean in light of the theories of that early legend of science, Charles Darwin. Maybe you’ve heard of him? He’s the guy who coined that pesky phrase “survival of the fittest.” If only the fittest survive, and most horror movies feature a “final girl,” then what does that say about the genre’s stance on men? Or let’s go at this issue another way: Do you actually think horror movies portray females as weak? Tell that to Halloween‘s Laurie Strode. Tell that to Scream‘s Sidney Prescott.

The winner of any fight is the one left standing — no one cares how you survive, as long as you do. If that survival comes wrapped in screaming, crying, pleading, more crying, running, a little more screaming, tripping, not being able to put the car keys in the lock and then finally sticking a knife in a bad guy? Yeah, you still won. So I don’t care how “weak” a final girl may look, if she’s the one who walks away, she’s the survivor and therefore the fittest.

You think me a crazy pusher of conspiracy theories? You think I’m reading too much into the harmless escapism of horror movies? Try this list of final girl flicks on for size, man-haters:

Notice any classics in there? Any movies that defined the genre? Yeah, that’s right, every one of them.

Political Forces at Play: Agents of F.E.M.A.L.
This kind of subversive culture-jacking doesn’t just happen on its own. I mean, come on: Do you really think people are just making the movies they want to make? Hell no! There’s always a secretive agenda out there. Some say these agendas are established by “the man,” but this column reveals the hidden truth: The agendas are really meant to hold the man down. The culprits in this blatant anti-male sexism are members of the Feminist Empowerment Movie Advancement Lobby, or F.E.M.A.L., a covert organization bent on pushing their philosophical beliefs on Hollywood. This lobby also pushes the agenda of stupid men in TV commercials, in which women are always the smart, savvy managers of home and business, while men are bumbling idiots who can’t grab their own asses with both hands.

The Villain? A Man.
In all of the “final girl” movies, except for the first Friday the 13th, the slasher is a man. No, I’m not counting Urban Legend, because that movie sucked like a turbo-charged Dyson. In final girl movies, not only is the villain a man, but he’s killed by the final girl. Remember that whole survival of the fittest thing? Yeah. Like that. Hollywood is full of man-hating sexist pigs.

Who Fails to Defeat Evil? A Man.
In all the slasher flicks, there’s a manly-man archetype: Macho, studly, occasionally dresses in a wife-beater to show off his guns. These muscular dudes in the prime of their lives go head-to-head with the slasher, and they get slaughtered. This is done to show us that the villain is truly a bad-ass, so bad, in fact, that no mere man could defeat him.

Who Defeats Evil? A Woman.
Why? Because F.E.M.A.L. is out to show you that brawn can’t win. Only brains can win, and only women have brains. Do the women find a solution where the brute-force men have failed? They do. And don’t you think that says something? You can only disagree if you’re a blind sheep in the flock known as “status quo.”

But All the Women Are Really Pretty! How Sexist!
Yes, and the men who play horror-movie roles are always so damned ugly. You know, Johnny Depp, Michael Biehn, Kevin Bacon, Laurence Fishburne, Josh Hartnett, etc. Could it possible that producers hire beautiful people in general? F.E.M.A.L. wants you to believe otherwise. In fact, if you look at the final girl in all of these movies, she’s usually the chaste, quiet, mousy one. That girl survives while all those hoochie-mamas buy the farm. Feminist empowerment indeed: F.E.M.A.L. is so hell-bent on agenda implementation, it doesn’t just make sure those idiot men get what’s coming to them — it also makes an example of women who fail to conform to their specific definition of what a woman “should” be. Now that is evil personified!

The Victims
Let’s face it — there ain’t a lot of discrimination in horror flicks when it comes to victims. Male or female, black or white, liberal or conservative… all y’all’s asses are on the chopping block.

Don’t Be Fooled
This is a battle for the hearts and minds, people. It’s all part of the sexist Hollywood agenda to keep the man down. Don’t trust those rants you hear about how horror movies degrade and disempower women, because by objective Darwinism principles, the genre is all about women. Unless, of course, you don’t trust Darwin … because he’s a man.