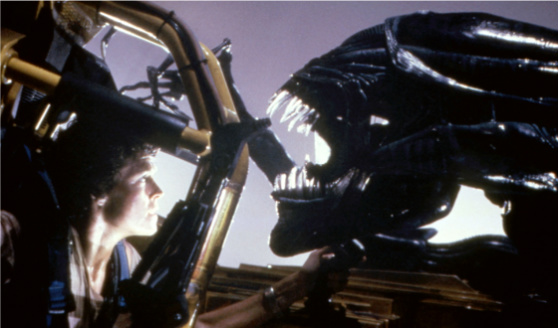 I’m all for the horror of suggestion and the subtle interplay of shadows in the night. But sometimes there’s nothing like a down and dirty, no-holds-barred monster fight. It can be two monsters pounding on each other. It can be a plucky regular joe or jane opening a can of whup-ass on some brand of hellspawn. But it’s all about who will survive and what will be left of them

Laurie Strode vs. Michael Myers, Halloween, Halloween II, Halloween H2O and Halloween: Resurrection; Halloween and Halloween II remakes (1978 – 2009)
An apparent mismatch: Gangly, good-natured teen babysitter Laurie Strode (Jamie Lee Curtis) in one corner, the honest-to-God bogeyman in the other. In the first two movies of the original series, it’s a draw: Laurie lives to fight another day, but Michael escapes. By Halloween: H20, she’s 20 years older and brings her A-game (A as in axe), killing Michael once and for all… until Halloween: Resurrection which contorts itself to give the ultimate victory to Michael. Rob Zombie’s Halloween is another tie, but Halloween II snatches defeat from the jaws of victory, going for the bittersweet: Laurie (Scout Taylor-Compton) defeats Michael, and loses her sanity in the process.

Freddy vs. Jason (2003)
How did it take almost twenty years
to pit the titans of ’80s horror against one another? Freddy Krueger
and Jason Voorhees are both in Hell. Freddy is pissed that the children
of Springwood have forgotten him, so he engineers his and Jason’s
escapes into our world. He then goads Jason into a fight to the death
that ends up with both of them falling into Crystal Lake. Jason is the
winner by a head… Freddy’s head, which is severed but very much
alive. Hey, maybe it could battle Ash’s severed hand!

Ash vs. His Hand, Evil Dead 2: Dead by Dawn (1987)
Poor Ash (Bruce Campbell) — the guy lives through the night of the Evil Dead
(1981) and six years later, he’s back in that godforsaken cabin. This time, he’s battling his own right hand, now possessed by those
nattering Necronomicon demons he and his idiot pals accidentally
unleashed. Director and co-writer Sam Raimi’s love of kick-ass horror
and Three Stooges tomfoolery are perfectly balanced in this scene’s
manic mayhem: It’s pretty damned funny when the hand starts smashing
crockery over Ash’s head, and pretty damned horrifying when Ash gets
the upper, um, hand via chainsaw amputation.

Ripley vs. the Alien Queen, Aliens (1986)
Luck and some quick thinking got final girl Ellen Ripley (Sigourney
Weaver) through Alien (1979), her first ordeal by extra-terrestrial
fire. By the time we get to Aliens, she’s remade herself as one tough
mother — tough enough stare into the mouth(s) of Hell to protect
the lost girl with whom she’s bonded. You can’t but cheer when Ripley
straps herself into an exoskeletal robo-suit and slaps the queen
of all ETs, “Get away from her,
you bitch!”

Father Karras vs. Regan, The Exorcist (1973)
You wouldn’t think Regan (chipmunk-cheeked Linda Blair), a pampered, 12-year-old girl, would stand a chance against a burly,
street-smart priest twenty years her senior (Jason Miller), would you? But
the tag team of Regan and Satan is another matter. Father Karras comes
out on top, but only by throwing himself down a long flight of stairs. His victory is the ultimate in taking one for the team.

Zombie vs. Shark, Zombie (1971)
Forget Mega-Shark vs. Giant Octopus.
Italian goremeister Lucio Fulci put together the ultimate fight card
almost 40 years earlier, pitting a rotting, waterlogged zombie against
the ocean’s ultimate killing machine — a big-ass shark. It doesn’t
last long and it’s inconclusive — both survive, both get chomped —
but damn, it’s a hell of a tussle!

Green Gargantua vs. Brown Gargantua, The War of the Gargantuas (1966)
OK, so two giant hairy humanoid monsters, identical except for
color, are created from cells harvested from Frankenstein’s monster
(the movie is kinda sorta a sequel to 1965’s Frankenstein Conquers the World).
Nice brown Gargantua is raised in loving captivity; nasty green
Gargantua raises himself in the wild, with predictably poor results.
The brothers eventually have to go mano a mano and the result is draw. As always, Tokyo gets stomped.

Godzilla vs. Mothra (1964)
Stop snickering. Yes, we’re talking the scaly, radioactive-breathed
King of the Monsters engaged in mortal combat with a giant moth, even
allowing for her paralyzing spore power. But hey, Mothra and her evil
twin, Battra, pretty much destroyed the world the last time they got
into it. And speaking of Battra, the battle royale is actually a
feature length three-way smackdown interruptus: Mothra fights Godzilla,
Godzilla fights Battra, Battra fights Mothra, Mothra and Battra team up
to fight Godzilla. It’s complicated, but Mothra come out the big
winner. That’s one hell of a moth.

Van Helsing vs. Dracula, The Horror of Dracula (1958)
Not only did Hammer’s first Dracula movie sex up the vampire movie with
heaving bosoms and Christopher Lee’s feral sensuality, but it ended
with a knock-down, drag-out fight to the death between the Prince of
Darkness (Christopher Lee) and his ascetic nemesis, vampire hunter Van
Helsing (Peter Cushing). By the time Dracula shrivels to a pile of dust
and a hank of hair, Van Helsing looks as though he’s run a
half-marathon.

Frankenstein Meets the Wolf Man (1943)
Tormented werewolf Larry Talbot (Lon Chaney Jr.) asks Dr. Manning,
who’s come into possession of Dr. Frankenstein’s notes, to find a cure
for his condition, but accidentally revives the monster. Cue the Grrrrrrrrrr! and the Owwwwwwwwooooooooooooooooh as the monsters duke it out until a nearby dam breaks and sweeps them both away. I’m calling that a draw.