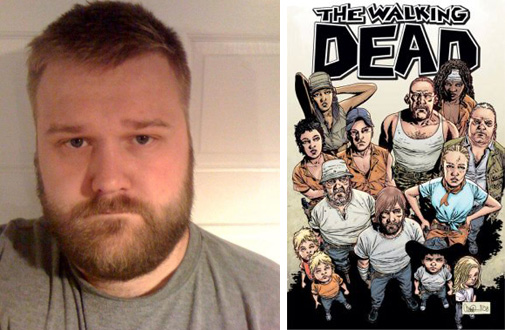 Horror Hacker caught up with Robert Kirkman, the man behind The Walking Dead comics, at Baltimore’s Comic Con and got the scoop on the origin of his zombie series and what made him say yes to an AMCtv adaptation.

Q: The Walking Dead is a stellar example of the zombie genre. Where are your influences?

A: My absolute favorite zombie movie is Day of the Dead. They’re in the bunker, the zombies look the coolest out of any of the Romero movies and I really like the story, the misery that these people have to go through. Shaun of the Dead comes in a close second.

Q: What about Night of the Living Dead?

A: The Romero movies as a whole, I really adore. Day of the Dead has more action and gore in it, while I think Night of the Living Dead is probably the most sophisticated zombie movie. It’s got excellent story, an amazing ending and it’s really artfully put together. It’s obviously been a huge influence. I like the Lucio Fulci Italian zombie movies… Holocaust movies inspired [The Walking Dead] a little bit, just to see people dealing with horrible things happening to them.

Q: What made you decide to do a comic in black and white?

A: That actually came from our original idea because [co-creator Tony Moore and I] believed Night of the Living Dead was in public domain. We thought it would be neat to just go out and do a comic book series that takes place in that world, and do it in black and white. In the end, we decided to
do something completely different, but to keep the black-white thing because you could get away with more gore. It’s not
all bloody and violent with red all over the page, so it seems a little less offensive. It’s also a little cheaper to print.

Q: The Walking Dead‘s main character, Rick, has been forced into many harsh situations. Is he going to continue down that path and finally go crazy?

A: If you’re asking if he is going to completely lose his mind and start killing people left and right… probably not. Rick is a strong character; he should eventually be able to overcome his current difficulties, but who knows? As the series is going right now, [Rick and his fellow survivors] are going to be arriving on a sanctuary of sorts where a walled-in civilization has been formed. Once they get in there, that might be the
thing Rick needs to finally get him to calm down and get his head together.

Q: The series reads cinematically. Was that intentional?

A: I just wanted to do a cool comic. I didn’t care if it ever got made into a television show or a movie, which is why it took so long to get it optioned… I didn’t want to do anything to water it down. I set out to do a long, sprawling story that took place over many thousands of issues and I was actually able to do that.

Q: How did you decide that AMC was the place to tell your story?

A: The body of work that they have produced so far: Mad Men is an excellent show; Breaking Bad is an excellent show. They’re two for two and 100 percent. That’s a pretty good batting average. I’m looking forward to The Prisoner, with Ian McKellen and Jim Caviezel. I don’t see that series not being
great. People have asked me…
“How are you going to do The Walking Dead at AMC?” and I am just like, “Have you seen Breaking Bad? They’ve got severed heads over here and piles of guts falling through ceilings over there.”

Q: If you had to pick someone to play Rick, who would it be?

A: There are so many guys out there that would do a great job. And I don’t want to ruin the chance to find the next Jon Hamm.