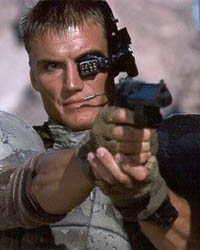 • Jean Claude Van Damme and Dolph Lundgren are teaming back up for a direct-to-DVD sequel to the ever-classic Universal Soldier.

• A fantastic informational poster on how to destroy pretty much every cinematic or video game scifi monster out there.

• My favorite schlock B-movie purveyors of the ’90s, Something Weird Video, have joined the 21st century with B-movie digital delivery.

• Fantastic Four: The Rise of the Silver Surfer was originally supposed to spin off a new Silver Surfer franchise, but an ambivalent box office stalled the project. J. Michael Stracyznski describes what could have been.