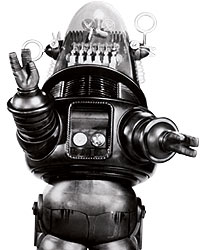 • The Crow is coming back to theaters courtesy of a remake, and io9 has an exclusive about their casting.

• The New Moon director previously directed The Golden Compass, which should have been a new speculative fiction cinematic masterpiece. Instead it was a dud, and the director tells us what went wrong.

• The Six Million Dollar Man is now peddling a bionic hearing aid. How the bionic have fallen!

• J. Michael Straczynski talks to SciFi Wire about his remake of Forbidden Planet.

• Variety reports that Stephen King’s new scifi thriller, Under the Dome, is going to become an ABC miniseries (Just like The Tommyknockers!) produced by Steven Spielberg.

• Everyone loved the balloon shenanigans of Pixar’s Up, but what happened once Carl took his house afloat?

• Happy 46th Birthday, Doctor Who. Hard to believe an immortal Time Lord is only 16 years older than me!