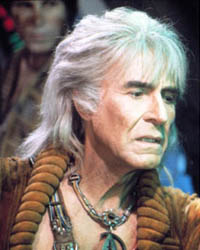 • Rebecca Mader, who played Charlotte on Lost, will be back for the show’s final season. Looks like they’re bringing everyone back, though my guess is that it’s going to happen in another timeline that runs parallel to the main one.

• Brad Pitt is now attached to a movie based on the video game Dark Void, about a pilot lost in the Bermuda Triangle who wakes in another world.

• Seems like every actress under the sun has been slotted to play the Black Cat in Spider-Man 4. Add another, perhaps more likely contender to the list: Anne Hathaway.

• Will Lost’s Richard Alpert play Khan in Star Trek 2? He would be a fantastic choice.

• Frank Frazetta’s Conan paintings are still the most faithful renditions of the character. One of his most famous ones has just sold for one million dollars.

• James Cameron’s Avatar has its plot ruined by the cover notes of the official soundtrack.

• Letters of Note publishes an amazing note that Kurt Vonnegut wrote to his father after getting out of a POW Camp, which contains some of the first philosophies and ideas that would eventually become Slaughterhouse Five.