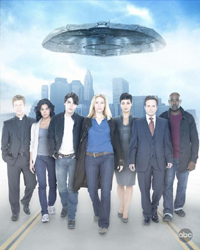 • Jupiter’s moon Io may have 100 times the oxygen previously thought, which means that there may be aquatic life swimming beneath its ice crust. Just like in 2010!

• Yeesh. V continues to slide precipitously in ratings just one week before it goes on hiatus for a couple months. ABC must really want this show dead.

• Famed genre director and producer Roger Corman has received an honorary Oscar. He deserves it: I’d be hard pressed to think of more directors who have given me a greater volume of joy.

• Tim Burton’s exhibit at the MoMA has on display some concept art from his canceled Superman Lives project, including this adorable Brainiac drawing.

• Will Julia Stiles of the Bourne Trilogy play The Black Cat in Spider-Man 4? She does look good in black leather.

• Think the war in Afghanistan is against the Taliban? Think again: Temco’s Space Invaders are our real enemies.