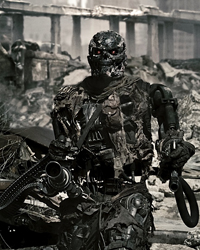 • That’ll do, pig: Disney lets McG go from the 20,000 Leagues Under The Sea, Captain Nemo prequel.

• io9 lists the dumbest superhero retcons of all time. Hello, Phoenix! And that’s one of the less stupid ones.

• If you’ve got a few grand to spare, the Griffith Observatory in Los Angeles will sell you a tour guided by Spock himself, Leonard Nimoy.

• A few weeks ago, Joss Whedon made a mock bid for the Terminator franchise. That’s never going to happen, but now his brother, Zack Whedon, is doing a Terminator comic series for Dark Horse.

• Tim Burton has an incredible exposition over at the Museum of Modern Art in New York.