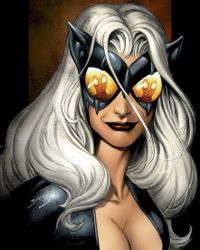 • Although it was rumored strongly that J.J. Abrams and Damon Lindelof — the two guys behind Lost — would adapt Stephen King’s The Dark Tower for television, Abrams himself says he’s now out of the picture.

• It now looks very, very likely that the Black Cat will play a significant part in Spider-Man 4, and may be played by Rachel McAdams.

• It’s long past due, but Gene Roddenberry, the creator of Star Trek, has finally made his way into the Television Hall of Fame.

• Isaac Asimov was a computer user, and he certainly loved the TRS-80.

• Richard Kelly of Donnie Darko fame and The Box infamy says he’d love to do a sitcom that takes place in Jabba the Hutt’s palace.

• In the 1970s and ’80s, Japanese illustrator Shusei Nagaoka did a bunch of progressive rock album covers, but also did some great scifi movie posters.

• What if the Mad Men were Mad X-Men?