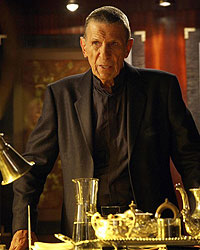 • J.J. Abrams says that despite dire ratings, the attitude in the Fringe writer’s room is optimistic, and Fox is being hugely (and uncharacteristically) supportive of their efforts.

• It’s his first movie in close to 13 years, but James Cameron’s Avatar already has a budget approaching half a billion dollars.

• Director Michael Doherty says he’d like another crack at the Jurassic Park franchise… as long as it isn’t set on that damn island anymore.

• How will they make a movie out of Hasbro’s Battleship? By adding aliens into the mix. That actually sounds to me like a pretty swell picture.

• The latest Star Trek movie has something of a Mos Eisley-like cantina scene, but it was originally much more so.

• Salman Rushdie may well have a fatwah on his head, but that doesn’t mean he knows anything about Superman.