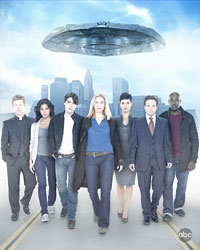 • Morena Baccarin says that Anna, her alien invader in V, is not meant to be a stand-in for President Obama.

• On the other hand, the White House press secretary says that he’s never even heard of V, and that calling Obama an alien invader is the most flattering slander he’s heard all day.

• A fascinating telegram posted over on the Letters of Note blog makes clear that the U.S. Navy was out looking for Martians as early as 1924.

• It appears that Bryan Singer’s Battlestar Galactica movie — set in an entirely different universe than the SciFi Channel reboot — is now entering pre-production. I love Singer, but I’m extremely skeptical.

• To boldly go where no sneaker has gone before: Star Trek kicks.

• Will the next scifi franchise J.J. Abrams tackles be the Micronauts?