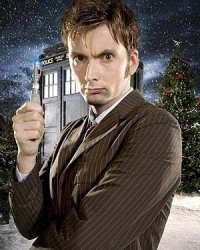 • Roland Emmerich is already talking a televised sequel to his apocalyptic film, 2012, pretty much giving away the ending for everyone in the process.

• The next Doctor Who special, Waters of Mars, will be airing in the U.S. later this year. If you’re curious what to expect, check out the three minute sneak peek. I’m going to miss David Tennant.

• All of the best art of the twentieth century is done on black velvet canvases, so needless to say, quite a few scifi heartthrobs have been given the flea market artistic treatment.

• The best found image of the day: Carrie Fisher and her Slave Leia stunt double bask in the sun on the hot sands of Tatooine.