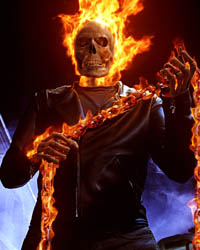 • If you have the time or patience to rearrange the whole 330,000 word novel by 5,000 word chunks, all of Stephen King’s Under the Dome can now be read online.

• Daniel Wilson’s How To Survive A Robot Uprising is coming to the big screen. That ought to be a fun apocalyptic picture.

• David S. Goyer says that Ghost Rider 2 will not be a reboot, but instead a sequel set eight years after the original.

• SF Signal hosts another Mind Meld: Scifi books that ought to be taught in school. Ender’s Game ought to make that list a dozen times over.

• What would the Batmobile look like if it were bio-mechanically rendered by Alien’s H.R. Giger? We almost found out.

• EC Comics’s Weird Science has been optioned by Hollywood, amongst other classic genre titles.