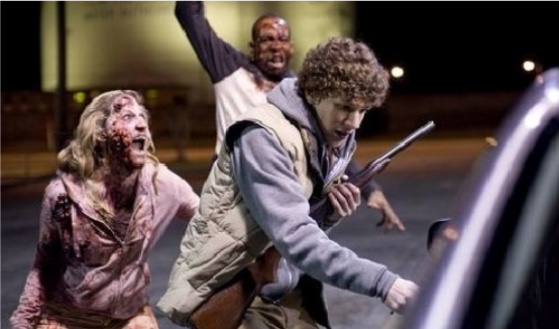 Horror comedies are a dime a dozen. Good horror comedies — which is to say movies that are both genuinely funny and genuinely scary — are another matter, and good zombie comedies… well, let’s just say that if you’re looking for a horror niche where the competition isn’t too stiff (tee-hee), you’ve found it. So the fact that Zombieland isn’t a patch on the sly Shaun of the Dead shouldn’t overshadow the fact that it’s frequently pretty funny and occasionally sort of scary, especially if zombies creep the bejesus out of you.

In the not-too-distant future, nobody worries about catastrophic climate change, the war on terrorism, third-world nukes, global economic collapse or swine flu, because some super-mad cow disease has turned most of the human race into sprinting, slavering, gut-munching zombies. So why is pale, trembling, virgin geek Columbus (Jesse Eisenberg) still alive?

First, because friendless shut-ins don’t catch what’s going around, and second, because being phobic, obsessive compulsive and risk averse is an asset in a world where flesh-eating corpses lurk behind every pretty face and toilet-stall door. Lonely enough to risk trying to get back to his hometown, Columbus (who hails from Ohio, hence the name) hooks up with good ol’ boy Tallahasse (Woody Harrelson), whose love of Willie Nelson, Twinkies and Bill Murray movies is exceeded only by his passion for killing zombies. They in turn cross paths with foxy Wichita (Emma Stone) and her baby sister, Little Rock (Abigail Breslin), whose pre-apocalypse experience in teenage grift stands them in good stead in the new world wasteland.

Zombieland is cute — surprisingly cute for a movie awash in blood, entrails and icky zombie drool– and admirably brisk: It’s over before you have time to wonder what the hell Wichita is thinking, driving cross-country just so her sis can visit Pacific Playland amusement park, never wondering whether firing up a billion watts worth of lights and noise might just attract every zombie from San Diego to Sonoma. And Bill Murray’s brief, brilliant appearance (more than a cameo, less than a supporting role) as some version of his bad old self eclipses a multitude of sins. His mordant, deadpan pranking in the face of death blows away the movie’s nerd-getting-the-hottie fantasy (even if it takes the end of the world as we know it to make it happen) and its flash-in-the-pan junk culture gags. Deliverance, Marlon Brando (check that Fugitive Kind snakeskin jacket!) and Ghostbusters have hung around long enough to accrue some collective pop-consciousness weight. He’s Just Not That Into You and Hannah Montana — not so much.