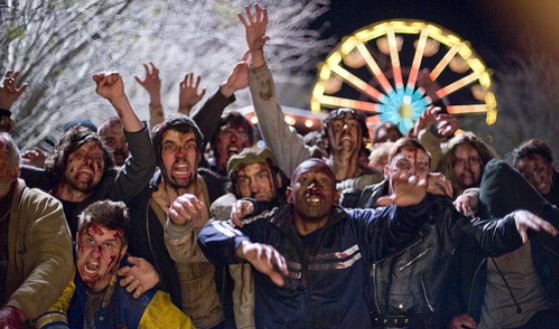 For once the big news of the week has nothing to do with a remake, a reboot or anything in the milking-a-dead-cash-cow vein. Oh, happy day! This week the buzz is about the possibility that a sequel to madcap horror comedy-that-could Zombieland might be in the works already. And to think, sequels used to be the bad news. In any event, the Woody Harrelson picture has an impressive 88 percent fresh rating on Rotten Tomatoes, along with a glowing consensus that it’s “[w]ickedly funny and featuring plenty of gore, proof that the zombie subgenre is far from dead.” Its success (along with the slow-burn rise of the freakily scary Paranormal Activity) has already made October a good month for horror fans (remember when distributors didn’t open scary movies until Halloween week?), so it should come as no surprise that the rumor of more adventures in Zombieland has bloggers taking to their laptops.

Back in early August, Web Stalker reported that Comic-Con fans were digging “Zombieland’s Menu of Flesh, Twinkies and Bill Murray.” The movie’s buzz only intensified from there, and by the time the movie hit theaters last Friday it had garnered enough momentum to make bloody mulch of the competition with a first weekend box office take of $25 million. Nut or shut up indeed! Of course, sequel rumors had already started circulating before the cash was tallied…

At the Zombieland junket in late September, just about everyone involved with the movie — including writers Paul Wernick and Rhett Reese, director Ruben Fleischer and the stars — were enthusiastic about the prospect. GetTheBigPicture reported that Fleischer said, “I love the possibility that there might be another movie. It would be fun to see what these guys get up to next.” Wernick, meanwhile, was telling MTV, “We would love it, and everyone involved creatively wants to do another one. Woody came up to us after the final cut of the last scene and gave us a hug and said, ‘I’ve never wanted to do a sequel… until this one.'” And Rebecca Murray, over at Rebecca’s Hollywood Movies Blog reported that when she asked Columbia Pictures President Matt Tolmach about the sequel, he responded, “Absolutely, emphatically, starting right now. Yes. I’m not shy. We’ll make the deal tonight.” Promising! Of course, all that talk was a premature until Zombieland‘s mix of gleeful violence and shlocky charm slayed ’em at the box office.

OK, so a Zombieland seems like a no-brainer: Money to be made, cast and crew on board, high-level studio support in place. But is it a good idea? GetTheBigPicture “loved” the movie, but wonders, “Could they really do a sequel? I really think this movie is great the way it is and it couldn’t work on the same terms if they did a sequel.” The UK’s FilmStalker goes on to wonder in more deatal, “What is there left to say on the film? I mean, we’ve seen the rules acted out, the realization of all the loners that there’s something better in being together, and the fact that the entire land is zombie-fied. Are we just going to see more and more zombies being killed with the same rules? Some new strangers appearing and the group turning into a traveling commune, or perhaps settling down to make a new life for themselves? Really I don’t see where it’s got to go, it’s not as though the film was exceptionally deep to begin with.” TheExaminer isn’t sure about it either, but throws up his hands: “What the hell, the film was outstandingly entertaining, so I’ll take more from these characters however I can get it.”

SlashFilm is one of the few to come out firmly on the side of “for,” enthusing, “It’s one of the first features in a long time that really makes me want a sequel. I could easily spend a lot more time in that world with those characters.”

Given Hollywood’s number-crunching approach to such decisions, Zombieland 2 is probably inevitable. Of course, all the aforementioned talk happened before the movie’s second-weekend drop off: Fearnet bemoans, “Though it warms my horror-loving heart that two good fright films placed in the top 5 this weekend, I’m still a little concerned that one of these films dropped almost forty percent from last week’s gross.” As Harrelson himself pointed out succinctly early in the game, “One key thing for when they want to do a sequel is that the movie is successful.” On the other hand, mega-hyped “blockbusters” often drop more than 40 percent in their second weeks, and the sequel cogs don’t stop grinding.

Still, if you’re desperate for a Zombieland sequel, it’s your turn to nut up or shut up. To quote writer Reese: “Grab your friends, and make them cast their vote for Zombieland 2 by buying a ticket to Zombieland 1.” And that, for now, is the final word.