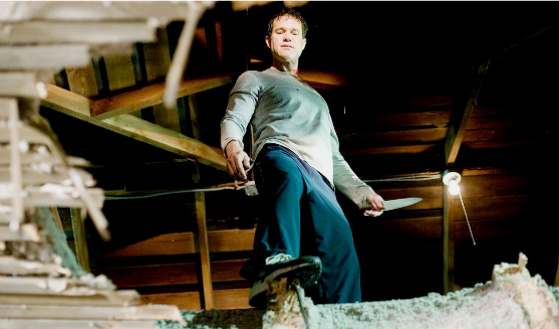 Veteran TV director Nelson McCormick’s The Stepfather is a serviceable remake of the 1987 thriller about a would-be family man whose dreams are repeatedly crushed by willful women and wayward children who just won’t act right.

Carefully scrubbed of all but the most sanitized violence in the name of securing a PG-13 rating, the movie begins as Grady Edwards (Dylan Walsh, of TV’s Nip/Tuck) meticulously alters his appearance before gathering his luggage and leaving the suburban Salt Lake City home where a woman and three children lie dead among the festive Christmas decorations and never-to-be unwrapped packages.

Six months later, “Dan Martin” bumps into recently divorced Susan Harding (Sela Ward) and in a Portland, OR, supermarket, and charms her common sense off with his sad tale of having lost his beloved wife and daughter to a drunk driver. They’re engaged in no time flat, and everything’s perfect. What could possibly go wrong?

Make that who and the answer is Michael (Penn Badgely, of TV’s Gossip Girl): Susan has a third child, a resentful, hot-tempered teen who’s been cooling his heels in military school. Now that he’s home for the summer, Michael is slow to warm to his replacement dad, despite Dan’s carefully calculated overtures. Even Kelly (Amber Heard), Michael’s sensible, longtime girlfriend, can’t convince him that Dan’s OK, especially as scraps of circumstantial evidence begin to pile up: A slip of the tongue here, a nosy neighbor’s suspicions there, a mysterious set of locked storage cabinets in the basement. How long will it be before Michael’s sullenness sets off his stepfather’s murderous rage?

Let’s leave aside the fact that that The Stepfather didn’t need remaking, because the original version is as quietly chilling as it was nearly more than 20 years ago. The trouble with the new Stepfather is that it’s astonishingly dull, in large part because J.S. Cardone’s reworking of Donald E. Westlake’s original screenplay (Cardone also wrote the remake of Prom Night) is so relentlessly dumbed down. I mean, once you’ve seen a guy who’s slaughtered his whole family enjoy a cup of coffee, some toast and a bit of Christmas music in plain sight of their battered corpses, you don’t need an interminable scene in which local cops discuss their suspicions to fear for the Hardings.

The performances are generally strong — Walsh in particular nails both the veneer of affability and the controlling anger beneath the killer’s façade — but the characters are useless, required to do so many oblivious (OK, moronic) things that it’s hard not to start thinking they deserve to be taken out of the gene pool. And not to sound like the pop-culture Taliban, but if you’re sufficiently concerned with the tender sensibilities of young teens to soft-pedal murder scenes in a movie about an exceptionally vicious murderer, you might want to ease up on the shots of high-school junior Kelly’s itty-bitty bikini-clad behind, especially since Kelly is supposedly all about intelligence, academic ambition and good sense. Just saying.