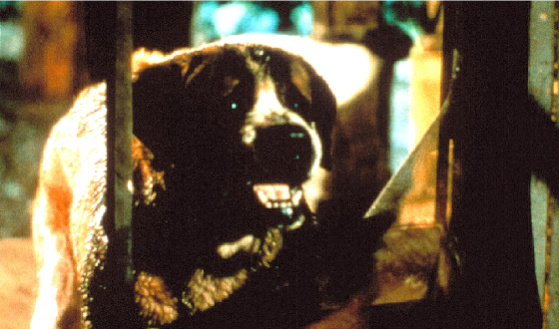 “Cat people” and “dog people” will argue until the end of time about which make better companions; cat people think dogs are dumb, dog people think cats are sneaky, untrustworthy jerks. When it comes to horror movies, though, there’s no debate: Dogs win, paws down. Cats may have a spookier reputation in real life, but on screen the canine competition gets all the glory; they’re louder and their teeth are bigger, after all. Here are some fiendish Fido-flavored flicks (I can’t believe I just wrote that) that may cause you to switch sides in the pet wars.

The Breed
Though riddled with stereotypical (and largely stupid) characters, corny one-liners and a bad case of explaining-too-much-itis, The Breed is still a better movie than you’d expect. A group of college students are spending the weekend on an island that happens to be home to a research laboratory… and here come the angry, genetically-mutated doggies! A familiar setup, sure. But the action is fierce and the dogs are 100 percent D-O-G. CGI be damned!

Cujo
Based on the novel by Stephen King, Cujo is the mack daddy of all killer dog movies, in no small part thanks to the fact that it stars scream queen Dee Wallace. Even though — or, perhaps, because — the action is largely confined to the area in and around the car in which one big, slobber hell hound has trapped Donna Trenton (Wallace) and her young son, Tad (Danny Pintauro), it’s tense and horrifying all the way through.

Devil Dog: The Hound of Hell
No, the titular Devil Dog isn’t a delicious chocolaty snack cake — he’s the canine spawn of Satan! Or something like that, anyway. See, a bunch of Satanists decide the best way to take over the world is to unleash a pack of German Shepherd puppies infused with devil-tastic badness. When smitten families bring home the adorable little buggers, the pups will hypnotize people into becoming Satanists! What can I say? It’s a complicated and clumsy plan… but who cares? This 1978 made-for-TV flick stars the kids from the Witch Mountain movies and is every bit as silly as you’d expect.

Dogs
What if all the pampered pooches of the world were to one day arise and put the bite on the human population? Huh? Well, it might look a lot like Dogs. Don’t go looking for explanations, though — we’re left to wonder why our four-legged friends go spontaneously homicidal. Maybe they’re tired of fetching or don’t actually enjoy wearing those stupid little sweaters we’re always putting them in. Whatever the reason, it’s undoubtedly all our fault.

Man’s Best Friend
The title of this movie is what’s known in the business as “totally ironic.” See, the “best friend” in this 1993 flick is anything but — Max has been genetically altered to be the perfect guard dog, all teeth and no nonsense. Unfortunately, fudging with his DNA has made Max more than a little cuckoo nutso, causing him to take a deadly bite out of crime… and anything else that crosses his path.

The Pack
I think people who abandon animals are jerks. And you know what? Animals think so too, and the dogs who band together in The Pack are mad as hell, and they’re not gonna take it anymore! Left behind when their summer owners abandon Vacation Island for home, these orphaned pooches join forces and kick ass, by which I mean they bite people and they bite ’em hard. The Pack is a terrific entry in the “animal attack” genre that was so popular in the mid-late 1970s.

Zoltan, Hound of Dracula
Hey, if Satan can have a dog then why not Dracula? Mind you, in this movie Dracula is dead, so his resurrected dog and resurrected man servant Veidt (Reggie Nalder) must walk the earth in search of a new master. Even if that premise doesn’t quite tickle your fancy, the movie is worth sitting through for the final moments, when viewers bear witness to the greatest creature ever captured on celluloid: A vampire puppy!

I don’t know about you, but right now I’m awfully glad I’ve got cats. Wait… did Dracula ever have a cat…?