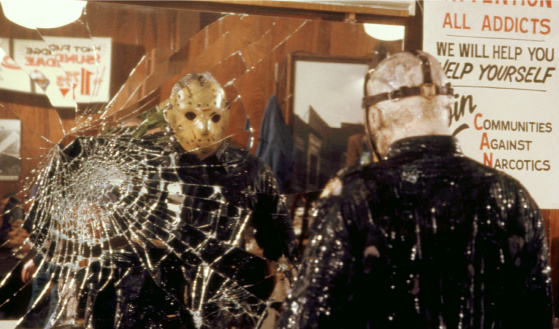 We’ve had political correctness forced down our throats for a long time, and that got me to thinking about the challenge of treating slashers and other movie killers as “real human beings.” Oh, wait… saying “forced down our throats” is probably potentially offensive. Hmmm … well, I guess the PC way to phrase it is “brutal serial killers have just as much a right to tasty candy treats as we do.”

I mean, who doesn’t love Halloween? OK, the grumpy dude who tells kids to “get the hell of my porch!” doesn’t. And there are fundamentalists who say the day is a tribute to Satan. But besides them, who doesn’t love Halloween? And in our culture of accepting all people at all times for all things, are you going to tell me that Michael Myers and Freddy Krueger don’t have equal rights to trick-or-treat goodness? Some mini-Snickers, an endless pile of candy corn or even Kit Kats? Jigsaw has as much right to treats as the next guy.

That said, there are parameters for social acceptance — you have the right to free speech, but not to shout “fire” in a crowded theater. Seeing Jason Voorhes walking through the neighborhood with his mask and bloody machete would cause a panic. So in the interests of giving these cats their now-inalienable rights and maintain social decorum, we need to give iconic killers their very own Halloween costumes.

Michael Myers: Captain Kirk
Look, he’s already got the William Shatner mask, right? Just give the dude a gold Enterprise sweater, a phaser, some Beatle-boots with tucked-in black pants and you’re good to go. Get your goodie bag, Mike, we’re going to clean up on mini-Butterfingers. (Dear Reader, please tell me you already knew Myers wore a William Shatner mask in the original movie… please?)

Chucky: Mini-Me
What could be more perfect? Shave down that crazy, ragged, red-headded mop, paste on a fake snarl, and boom — Chucky is Mini-Me (Verne Troyer) from the Austin Powers movies. Child’s Play costumes were always popular with the height-challenged, but Chucky can rock the hizzy with this one. He’s partial to Sour Patch Kids, by the way, so have some handy if you don’t want to see a screaming, sugared-up hissy fit.

Jason Voorhees: Marc-Andre Fleury (Pittsburgh Penguins goalie)
Look, I’m not going to ask Jason for his mask. Are you? I didn’t think so. But he’s got to sleep, right? How about while he’s cat-napping, we just glue the mask of NHL-champion Penguins goalie Fleury on top of his current ’50’s-era, Detroit Red Wings mask? Jason will get up, go about his business and won’t even know the difference. Add a Pengies’ jersey, skates, pads and voila: Winner of best costume award at any corporate party. (Oh, and P.S. Pittsburgh: When the Wings bring the cup back to its rightful home, the Fleury mask gets tossed in the crapper and Jason goes back to looking bad-ass, D-Town style).

Jigsaw: Wilbur from Charlotte’s Web
Home-slice already rocks the tricked-out pig head, so let’s let him rock that with a sign-necklace that reads “Some Pig” and blammo — coolest cheap costume you can get your hands on. You know Jigsaw digs those mini-Milky Ways and tiny Tootsie Rolls, so let him get his treat on.

Scream Killers: Emperor Palpatine
Less a costume than a mask swap-out, and since we know there’s a different killer in every flick, it ain’t like trying to get Voorhees to ditch the goalie gear. This simple change will get our Scream killers back out on the town, knocking on doors and asking for goodies. While the black-robed butchers are partial to Little Debbie snacks (Star Crunch and Swiss Rolls), they’re OK with Hot Tamales and mini-Almond Joys.

Leatherface: Mickey Rourke
Wait a minute… is Mickey Rourke actually Leatherface in real-life? Hold on while I fact-check. Nope, Rourke hasn’t made a Texas Chainsaw Massacre movie… not yet, anyway. Still, Leatherface can throw on the knee pads, elbow pads, high boots and spandex snuggies of Randy “The Ram” Robinson and boom, no makeup necessary. (Randy “The Ram” is Rourke’s Oscar-winning role in The Wrestler… try to keep up, will ya?)

Smell My Feet…
There you go, Dear Reader: Costumes that will allow everyone to join the fun. You have to admit, being in a trick-or-treat group with The Ram, Mini Me, Captain Kirk, Wilbur, Emperor Palpatine and that non-serial-killing hockey-mask dude would be a damned good time. And the only thing you’d have to shove down your throat would be some mini-Hersheys and maybe some M&Ms. No matter what your political stance, that’s the kind of bi-partisanship we can all get down with.