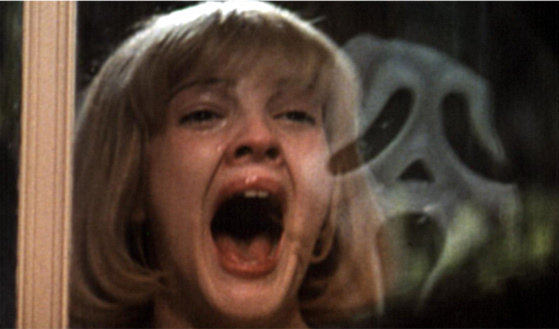 A few weeks back we looked at the deadly institution of Greek sororities in a little column titled Delta Delta Doom. College, it seems, can be dangerous. But garbage out means garbage in, and these collegiate killers had to come from somewhere. Where they came from, Dear Reader, is hellish high schools. Continuing on our theme of deadly educations, I give you the Top Ten High School Horror Flicks.

They’re good, but not good enough. Thanks for playing!

10. Student Bodies
Billed as the first horror-comedy flick, when this bad boy came out it spoofed slasher flicks like Prom Night, Halloween and Friday the 13th. Complete with a running, on-screen body count, Student Bodies hammed up the horror and dialed in the heavy-breathing, killer-cam style of the time (the killer, played by Richard Belzer, is known as “The Breather”). Murder weapons included an eraser, paper clips and clever use of a horse-head bookend. Why is it on this list in front of honorable mentions like Prom Night and Class of Nuke ‘Em High? Because of the high body count tallied inside the high school, and because of its early foray into the now-lucrative horror-comedy category (say “thank you,” Zombieland and Shaun of the Dead).

9. Heathers
Not much of an in-school body count in this cult classic, but so many of the death-plot setups take place in the halls, we’ll count it anyway. And you know what, all you doubters? I love my dead gay son. So there. Back before Christian Slater did voice-over work for online car sales, he was one of Hollywood’s young stars. His role as a charming-smiled killer here is good enough to put Heathers on the list.

8. Buffy the Vampire Slayer
One might think an extended dance scene with grizzled action star Rutger Hauer and a barely-legal Kristy Swanson could set the censors on edge and get the flick pulled off of more screens than Black Snake Moan. But the dance is a senior dance, and Hauer and Swanson do the Tango of Terror in a vampire vs. vampire killer finale. It seems that high school dances are not a safe place to send your kids (as you’ll see from other entries below). Yes, all you Whedon slaves, this was the real Buffy action, and the high school body count is enough to make it No. 8 on our list.

7. National Lampoon’s Class Reunion
A high school movie written by John Hughes has to be good, right? Well, maybe not, but this is definitely a horror movie, it’s set in a high school, and it’s written by John Hughes, so it’s a dark horse to sneak onto the list. Show me another John Hughes-written high-school horror film, and you can pick the No. 7 slot, tough guy! The movie is about a 10-year class reunion (obviously) but the entire flick and all the killings take place inside a high school. Ergo, it makes the list.

6. Scream
No offense to the thousands of education administrators out there who bust their asses in a largely thankless job, but come on — even you guys can remember back to high school and wishing death upon the principal. Principal Arthur Himbry (Henry Winkler) buys the farm at the hands of the killer. And not only do we have that high school fantasy (second only to being held after school by that hot science teacher wearing the skirt and the fishnets), but we have Wes Craven as a school janitor. If that ain’t good enough for a No. 6 ranking, then sister, I don’t know what is.

5. Ginger Snaps
We’ve had slashers, comedians, vampires and the high school girls you’ll find in every high school in the history of man (psycho chicks from Heathers), but what about werewolves? Don’t they deserve equal rights as well? I believe that they do, and since Ginger Snaps is a smart indie movie that has some unfortunate boys biting the dust inside the school’s hallowed halls, it counts. And don’t think a gothed-out, sex-rampaging Katharine Isabelle had anything to do with my vote, because it didn’t. At least not that I’ll admit.

4. Halloween H20
A classic slasher icon, the penultimate scream queen, both getting together for a fight to the death some 20 years after the original? Hell yes. Oh, and did I mention the fight to the death is in a high school? Slam-dunk, baby, that’s a clear No. 4 ranking as Jamie Lee “The Queen of Horror” Curtis takes on her uber-nemesis, Michael Myers. The sheer balls of this plot, of bringing these two legends together for a two-decade-old grudge match, it’s just too good to pass up for a high ranking in the Top Ten.

3. Dance of the Dead
While most of you have never heard of this straight-to-DVD flick, leaving it off the list is simply an impossibility. A massive body count in a high school. Most of it happening at the prom. Oh, and a crap-load of zombies. That’s right, zombie slaying at a high school prom. Campy with clever lines and creative use of baseball bats, this is one to add to your NetFlix account as soon as possible. It’s the best zombie massacre high school prom movie you will see this month, and you can trust me on that.

2. The Faculty
I’ll be honest, this isn’t the best movie in the history of mankind. But you know what its got? I mean, besides a significant pile of bodies stacking up in Senior hall between third and fourth hours? It’s got crazy body-snatcher type mind-controlled teachers getting whacked, baby, and it’s got one thing the other movies don’t — a giant freakin’ insect master monster getting mashed underneath the gym bleachers. So you’ve got your zombies, slashers, werewolves, vamps, crazy girls, comedians and now you’ve got big-ass alien bugs. Why does it rank No. 2? Where else can you see Jon Stewart catch a paper-cutter blade in the dome? Nowhere else, that’s where.

1. Carrie
Could there really be any doubt about No. 1? The definitive flick about the cruelty of high schoolers, the victimization of outsiders and social misfits, and the glorious telekinetic revenge of one such misfit. And no, I’m not talking about Scott Baio in Zapped, Dear Reader, we’re talking serious scorched-earth carnage. Would there even be a Prom Night and Prom Night II if Carrie White hadn’t already danced the night away to the blissful sound of her classmates burning to death? Probably not. This movie truly stands the test of time (that is, if you can bear with some of the zingy “be scared now!” sound effects), and is the Homecoming Queen of all high school horror flicks.

Get Your Class Pictures Now
There you have it, Dear Reader, the ten greatest horror flicks ever to walk the halls of silver screen high schools. Did I miss any? Got a bone to pick with my list? Then by all means, write your comment 100 times on the blackboard — and by “blackboard,” of course, I mean the comments section below. And by “100 times,” I mean once, you friggin’ spammer.