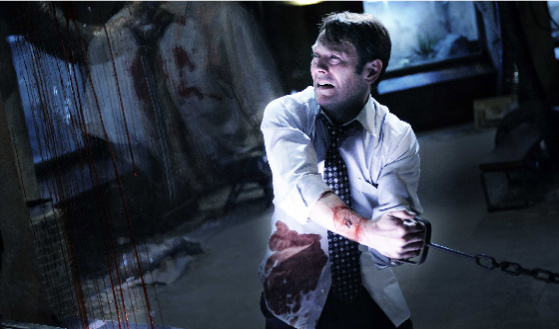 The franchise continues its descent into an insanely complicated backstory with Saw VI, again written by the team of Patrick Melton and Marcus Dunstan, who took up screenwriting duties with Saw IV. Here principled serial killer Jigsaw — aka John Kramer (Tobin Bell) — targets a selection of especially timely victims: Predatory loan officers and avaricious insurance-company executives doing their damnedest to deny coverage and lobby against health-care reform. This timeliness is especially impressive in light of the fact that Jigsaw has been dead since Saw III, and picked his subjects long before the current economic meltdown. In any event, let the games begin…

Umbrella Health executive William Easton (Peter Outerbridge) both devised the mathematical formula his company uses to maximize profit by minimizing payouts and personally denied Kramer’s request for coverage for an experimental cancer treatment, despite the fact that he knew Kramer and his wife, Jill (Betsy Russell). As if that weren’t enough to let us know he’s a world-class schmuck, he also has a piranha tank in his office, refers to his staff as dogs, and stands up his wife on her birthday so Umbrella’s pretty chief counsel (Caroline Cave) can coach him in weasel-wording his way through an upcoming deposition connected with a breach-of-contract lawsuit.

So it comes as no surprise that Easton soon finds himself in Jigsaw’s dungeon of dastardly devices, forced to play ever-more agonizing games he can win only if others die. Jigsaw’s work, ostensibly a grotesque personal-justice project that teaches appreciation of life through bizarre acts of self-mutilation and murder, is now being secretly overseen by his onetime adversary, Detective Hoffman (Costas Mandylor), who inherited the gig from Jigsaw’s first disciple, Amanda (Shawnee Smith). Hoffman has successfully diverted suspicion to missing FBI Agent Strahm, whom Hoffman knows to be dead. But Strahm’s partner, Agent Perez, isn’t — contrary to what appeared to be the case at the end of Saw V, and she poses a threat to Hoffman’s charade.

All this colluding and increasingly baroque pre-planning is light years from the sublimely simple premise of Saw (2004), in which two men are chained by the ankle to pipes in a filthy public bathroom and put through a series of trials by a tape recorded voice that eventually asks them to choose between amputating a foot or dying. Which is why the later Saw movies rely so heavily on flashbacks that explain who means what (and did what) to whom and why we could never have guessed at their secret lives and hidden motives. One of many ironies is that Jigsaw/Kramer gets more screen time than he did when alive — he’s barely in the first movie — which is terrific for actor Bell, who’s perfected the parched voice and melancholy smile that make Jigsaw an oddly sympathetic psycho, but leaves viewers playing constant catch up. The threat of a pop quiz seems to hang over the series, and woe betide the Saw fan who failed to keep up.