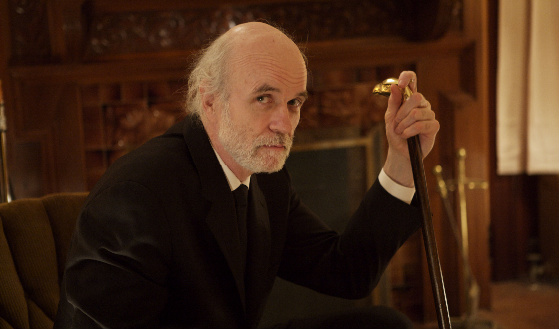 Tom Noonan, star of The House of the Devil is impossible to categorize: He’s played villains (Manhunter‘s serial killer), starred in offbeat indies (Synecdoche, New York) and even portrayed a classic movie monster (Frankenstein in The Monster Squad). We talked to Noonan about his creepy work in The House of Devil, creating memorable bad guys and a possible return to Frankenstein.

Q: The House of the Devil has a definite 1970s-early ’80s slow-burn horror vibe. Are you a fan of that genre?

A: I love The Exorcist, but it’s not really in the genre at all. There’s this sort of feel to these Japanese movies that are out now, like [Ju-On:] The Grudge and the original Ring [Ringu]. Not showing a lot of horrible stuff, just continuing to build up the tension, which I enjoy. I don’t like being grossed out or overwhelmed by slashing and killing.

Q: That’s what I appreciated about The House of the Devil. It’s a build up that you watch with a sense of dread.

A: And that’s what life is like. You’re living this life, and you figure everything is fine, but you know in your heart that at any second something horrible could happen. Which I find very real and true.

Q: Fear of the person next door…

A: Or fear of stepping out your door. Or of a plane running into a building, which is a fear where I live. All kinds of things that can happen.

Q: How did you get involved in The House of the Devil?

A: Well, I did another movie with [director] Ti [West]…

Q: …The Roost, another low-budget indie horror, in which you played a Cryptkeeper-type horror host.

A: Yes. You’d be surprised though, budget-wise. Just because it’s a low budget, that doesn’t always translate to things not being under control. [House of the Devil] had a really great cameraman, a really great crew. Everything seemed to go very smoothly. It didn’t seem all that different from doing, say, a Michael Mann movie. Ti’s very good with making the best of what he has.

Q: In this new movie, the house is a character itself, like in The Amityville Horror.

A: Apparently the house didn’t have any of that feel when we got in there, and the crew did a lot of production work on it to make it look that way. It’s also on a pretty busy road, and not that far from other houses, but they really make it seem like you’re in the middle of nowhere.

Q: The House of Devil is another villain role for you, after memorable bad guy turns in Manhunter and Robocop 2. Are you drawn to these sort of characters?

A: I don’t really think about that all that much. Mostly I’m just looking for decent parts where I don’t have to say anything all that stupid. I tend to avoid parts where I have to scream and yell and be supposedly scary and threatening. Even in Manhunter or Robocop, most of the time I’m acting normal, and talking softly and sort of being like I am in normal life.

Q: What sort of preparation do you do for a role like the Tooth Fairy Killer or Mr. Ulman in House of the Devil?

A: I don’t play these particular parts all that different than I would play someone who is “normal.” I did Synecdoche, New York with Charlie Kaufman, and I don’t really remember feeling that different doing that than I felt during [House of the Devil]. I sit, and I talk, and I listen.

Q: Horror movie fans of a certain age remember you as Frankenstein’s monster in The Monster Squad. Any chance you’d pop up in the rumored remake?

A: Somebody mentioned [the remake] to me and it made my stomach drop. I’m sure they’re never going to hire me to play that part again. I wish they would. Would Fred [Dekker] direct the remake?

Q: It doesn’t look like it. It sounds more a remake in name only.

A: I’m sure it’ll become one of these things where I’ll have to endure yet another remake. [Laughs]

Q: Right, like Red Dragon. Are you a fan of the Universal Monsters? If the chance arose would you play another one?

A: If the script were good, sure. I like the makeup stuff — it makes it even easier to act than normal. It could be fun.