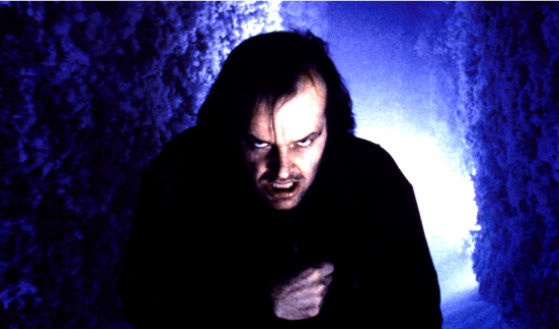 Like fellow thespian Anthony Hopkins, Jack Nicholson isn’t the first name that comes to mind when you think “horror star.” But like Hopkins, he’s got a surprisingly rich genre resume. No to mention the adjectives so often associated with him: “Devilish,” “wolfish,” “saucy.” So yeah, Jack Nicholson was made for horror movies, by which I don’t mean horrible movies like The Bucket List (shame on you, Jack). I mean movies like these:

The Shining (1980)
If you make only one horror movie in your whole career and that one movie is The Shining, your genre cred is good for life. And if you also happen to create a character as flat-out terrifying as Nicholson’s Jack Torrance — you’re golden. And I do mean Nicholson’s Jack Torrance. Stephen King wrote the novel and Stanley Kubrick co-wrote the screenplay, but it was Nicholson who made Torrance’s transformation from loving husband and father to axe-wielding psycho the stuff of nightmares.

Wolf (1994)
That lupine grin I mentioned earlier? Here’s where it comes into play. OK, the “business world as jungle” metaphor is none too subtle. But after being bitten by a werewolf, Nicholson’s Will Randall truly is the king of the publishing jungle: The role uses every ounce of his swaggering, cocksure attitude, and what other actor could have pulled off that literal pissing contest with a rival and made it feel so threatening?

The Witches of Eastwick (1987)
Witches may be a lighter brand of horror, but as Daryl Van Horne, Nicholson truly is the devil incarnate. You don’t wonder for one second why three stunningly beautiful woman are all bewitched by a balding, middle-aged, less-than-buff man like Van Horne (you have to love that name): Nicholson’s got the devil’s own charm.

The Raven (1963)
The most shocking thing about The Raven is what a fresh-faced youngster Nicholson is in this early Roger Corman picture. He plays the son of a minor magician (Peter Lorre) who at one point finds himself under the “diabolical mind control” of Boris Karloff. It’s a horror-comedy and the comedy dominates, but there’s Nicholson rubbing shoulders with Lorre and Karloff and Vincent Price, horror icons all. Birds of a feather…

The Terror (1963)
As it happens, The Raven came in three days ahead of schedule and Corman, never one to waste an opportunity, threw together this period horror tale. Nicholson, 26 at the time and struggling to get his career off the ground, plays a young army officer trapped in the spooky castle of a mad man (Karloff). It’s a pretty horrible movie, but you know what? It’s still not as horrible as The Bucket List.

The Little Shop of Horrors (1960)
Short, slight and ultra-low-budget, Little Shop of Horrors — yet another Corman quickie — is also a pretty inspired black comedy about a flesh-eating plant and the schlemiel who gets stuck catering to its appetite. A schlemiel who is not played by Nicholson, who has exactly one scene in what was only his third feature film. And he’s absolutely great as a masochist at the dentist’s office: When the movie became a cult hit, Nicholson was the guy everyone talked about.

And hey, when you look Jack Nicholson up on IMDb, you know how he’s identified? Actor, The Shining. ‘Nuff said.