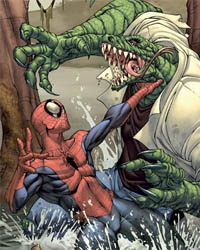 • It’s hardly official, but a number of blogs are now reporting that not only is actor Dylan Baker back for Spider-Man 4, but he will finally indeed transform into The Lizard.

• Another depressing side effect of Nickelodeon buying the rights to the Teenage Mutant Ninja Turtles: The twenty five year old comic series is now coming to an end, at least as far as Mirage Studios is concerned.

• Firefly sure as heck isn’t the only space western out there, so the eponymous spacewesterns.com has compiled a list of the ten most influential.