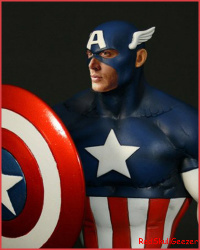 • SciFi Squad lists their favorite hunk of junk spaceships. I’m shocked they left off the flying saucer from District 9 in favor of the camper from Spaceballs.

• Astro Boy opens Friday, and you might expect it to be just another kids movie, but be warned if you take your little ones: The film is just as unapologetic about a mature depiction of death as the comic.

• Marvel Editor-in-Chief Joe Quesada says that the upcoming Captain America movie has a “very unexpected” script. I hope that doesn’t mean Cap won’t be socking Hitler in the jaw. That’s all I want to see!

• David Duchovny wants a third X-Files movie by 2012. I don’t even think moviegoers wanted the second one, Duke.

• A Cinematical writer who was misquoted in Transformers 2‘s advertising campaign revisits the movie now that it’s hit Blu-Ray.

• Get my girlfriend knitting, stat: Wonderful, astronomic quilts, inspired by the swirl of galaxies.

• The illustrious SF Signal hosts another Mind Meld: What every reader should know about speculative fiction and mainstream acceptance. Heady thinking here.