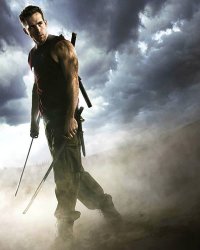 • Rorschach and the new Freddy Kruger himself, Jackie Earle Haley, says he might be Sinestro in the new Green Lantern movie if the fans have their say.

• The producer of X-Men Origins: Wolverine says he wants to reboot Deadpool and that Magneto is dead. He also says First Class will take a page out of Harry Potter and become a franchise.

• If Magneto isn’t dead, though, who would play him as a youngster? I’m ashamed to admit I never considered Ewan McGregor.

• I continue to be surprised at how good and true the clips to the new Astro Boy movie are. I’ve gone from a skeptic to an opening day ticket holder.

• A major death is coming to NBC’s Heroes, but everyone is wondering why it won’t be the entire show itself.

• As weird as the Prawns were, the aliens from District 9 were supposed to be even weirder.

• Every two weeks, io9 is posting a chronological review of the complete history of the Hugo Awards. This week’s review is of 1953’s The Demolished Man.