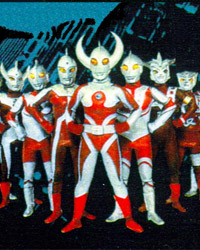 • Bill Murray says that far from being confirmed for Ghostbusters 3, he hasn’t even seen a script.

• Douglas Adams’ Hitchhiker’s Guide to the Galaxy series is coming back to the BBC, with a television comedy series based on Adams’s Dirk Gently’s Detective Agency.

• Brett Ratner not only claims that X3: The Last Stand saved the X-Men franchise, but that comic fanboys are idiots.

• This incredible Doctor Who fan movie is at least as good as most of Russell T. Davies’s recent forays into the mythos.

• It is the end of the work week. Why not treat yourself to twenty Slave Leias, lusciously paraded before you in gilded bikini glory?

• Darth Vader and Batman photoshopped into vintage World War II images. How strange: The only one I’m positive fought in WWII was the Caped Crusader!