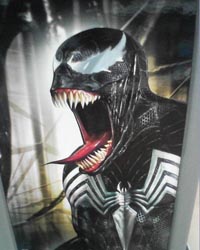 • Orci and Kurtzman are abandoning the Transformers series as scribes. Good. The last two were awfully written.

• Screenwriter Gary Ross, who is rewriting the script for Spider-Man 4, is now slated to direct and write the Venom spinoff, with Venom depicted as an “anti-hero defender of the innocent.”

• Speaking of Spidey, the LA Times‘ Hero Complex examines the complications facing the Spider-Man franchise. They seem to think Spider-Man 4 will be Raimi’s last.

• Is AMC’s own Mad Men star Jon Hamm a good choice for both Superman and Batman? Kevin Smith says yes.

• Tomorrow, NASA will smash a rocket into the moon to look for water. It will be cool. You should watch it.