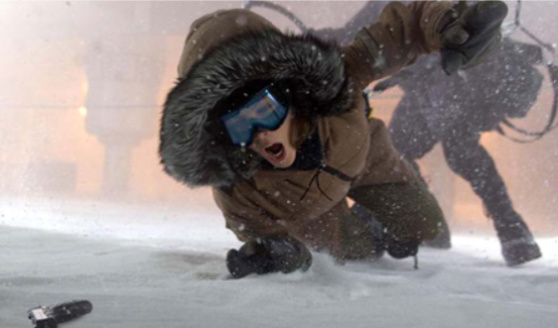 Here’s a dilemma: Your movie, Whiteout, stars Underworld‘s sexy Kate Beckinsale (yay!), but it’s set in frigid Antarctica, where the dress code runs to multiple layers of sweaters, scarves, thermal vests and lumpy parkas (boo!). What to do? If you’re smart, you follow the action-packed, 50-years-earlier prologue involving trigger-happy Russians and a spectacular plane crash, with a sequence in which Beckinsale strips off her layers of gear and takes a steamy shower. OK, is everybody happy? Now, to business.

Troubled federal marshal Carrie Stetko (Beckinsale) fled her demons to the literal ends of the Earth: The Amundsen-Scott research facility at the South Pole, where the worst things she has to deal with are disorderly drunks and the occasional penny ante entrepreneur growing hydroponic pot. But after two years of pitch-black Antarctic winters, she’s ready to venture into the world again and make a fresh start. Stetko tenders her resignation to the Justice Department, packs her stuff and reserves a space on one of the last flights out before the mother of all snowstorms blows through and locks anyone still on the ground into a six-month stay.

Wouldn’t you just know that someone picks this moment to discover the frozen, shattered corpse of an American science geek named Anton Weiss, one third of a crew looking for meteor scraps in the unforgiving ice? Much though she might like to, Carrie can’t shake the feeling that this broken dead man is just the loose-end of some sinister tapestry, one important enough to merit the attention of enigmatic FBI agent Richard Pryce (Gabriel Macht, star of Frank Miller’s dismal The Spirit), who shows up mysteriously just after another of Weiss’ team is murdered and Carrie is attacked by an ice-axe wielding maniac.

Ignore the marketing campaign that positions Whiteout as a monster movie on the order of John Carpenter’s The Thing. It’s not: The only monsters are human. But it’s a pretty damned good suspense thriller: You can pick apart dicey plot points when it’s over, but the sheer remorselessness of the Antarctic landscape (actually Canadian Manitoba) lends urgency to the otherwise standard-issue red herrings and hackneyed scares. Screenwriters Jon and Erich Hoeber and Chad and Carey Hayes (yes, two sets of brothers) take significant liberties with the details of Greg Rucka’s 1998 comic book miniseries, but stick close to its cold, cold heart. Sure Carrie is looking for a killer who may be closer than she thinks, but the real enemy is the biting cold that kills the virtuous and the corrupt with the same pitiless indifference.

For an alternate opinion, check out the Whiteout review at AMC Filmcritic.com.