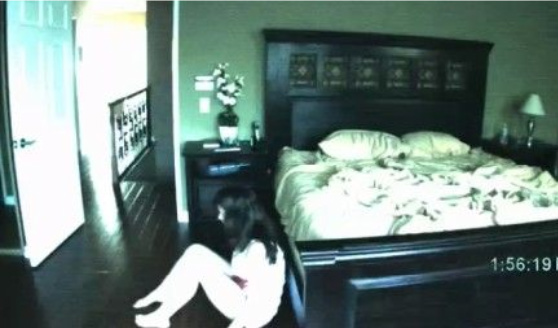 Hoo boy, this is exciting. The movie that many a hard-hearted critic has called the most terrifying movie ever made is coming to theaters! And it’s happening in just a couple of weeks. That’s right: Oren Peli’s Paranormal Activity is getting its official release on September 25. You’re not gonna want to miss it. Trust me.

A little background, for the uninitiated: Back in 2006, Peli shot his mock-doc dream project — a chronicle of the nocturnal goings-on in a haunted house occupied by one increasingly terrified couple — on a shoestring budget of $11,000, with a cast of no-name actors. In 2008, he managed to get the movie into Slamdance and Screamfest, at which point all hell broke loose… in the best possible way. Here’s a sampling of the frenzied response: “The entire auditorium was freaked out of their minds…people were actually physically shaking” (Dread Central); “Paranormal Activity managed to do something that almost no other haunted house movie in the past 25 years has managed to do: Actually be scary” (Bloody Disgusting); “It sufficiently freaked out those of us who watched [it]…. that I ended up asking a coworker to crash in my room for the night because I was afraid I wouldn’t be able to get to sleep alone (Cinematical); “Believe the hype!” (Ain’t It Cool). You get the idea: Hardened professionals were reduced to quivering wrecks.

Naturally, the big studios came sniffing, and DreamWorks/Paramount walked away with the rights, only to announce that they’d be giving it the full remake treatment. You know, because a movie made for such a pathetic sum of money couldn’t possibly compare to one of their big glossy masterpieces, right?)

The remake news went down like a lead balloon. About.com’s horror blog snarked, “Would Hollywood ever feel the need to remake a perfectly good film that can stand on its own right…? Oh yeah. Right.” Upon reading that Peli was excited about the new possibilities, New York magazine’s Vulture blog mused, “Will one of those ‘things that were not possible before’ be replacing all of Paranormal‘s cast of unknowns with Sarah Michelle Gellar? We hope not! Because Cloverfield‘s success should have reminded Hollywood that concept can trump casting if the concept is good enough. And a movie filled with no-names can still make a hell of a lot of money.”

Well, somewhere along the way DreamWorks brigade wised up, because suddenly last week they announced that they’d thought the better of this whole remake idea! “The folks over at Dreamworks have reminded us of a time when being a movie studio actually meant something,” Screen Rant thrilled, “by deciding NOT to remake the already-horrifying Paranormal Activity. In unrelated news, a recent survey of Hell shows the climate of the region down ten degrees from this time yesterday.” Dread Central was also uncharacteristically enthusiastic: “Words alone cannot describe how happy we are to hear this. Our hats are off to both Schneider and Paramount for giving the film a chance to be seen and not rushing out a remake. Best damned news we’ve heard all day.”

Meanwhile, the response to that post should give you some sense of how the fans feel about the matter. “Everything I’ve heard and read about this movie makes me want to see it in the absolute worst way,” moaned one. “Fabulous news!” exclaimed another. A third was even more succinct: “!!!!!!!!!!!!!”

In short order, Paranormal Activity got its own Facebook fan page and Twitter feed. The official trailer finally appeared online (after countless “here it is… oops, there it wents”) and that September 25 release date started popping up all over the blogosphere. The only disappointment? It’s said to be a “limited release,” so there’s a chance no one other than Angelenos and New Yorkers will be able to see it.

Of course, if Paranormal Activity really does turn out to be the Next! Blair! Witch!, as so many bloggers have proclaimed, it will only be a matter of time before the big-budget sequel lumbers into theaters, groaning under the weight of impossibly high expectations and nervous studio oversight. But for now, let’s focus on the positive: Something wicked scary this way comes!