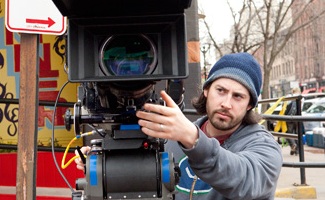 Between the debut of his latest directorial effort, Up in the Air, which stars George Clooney as a business executive in crisis, and his role as a producer of the Midnight Madness opening night movie Jennifer’s Body, writer-director-producer Jason Reitman is having a very good festival. Toronto is where Reitman debuted Thank You for Smoking and Juno, and as the son of Canadian director Ivan Reitman (Ghostbusters, Dave), he’s got more than enough Canuck “cred” to merit hometown success-story status, despite growing up in L.A.

Q: When the headlines started to turn towards our current economic status, did you feel a mixture of dread and satisfaction, feeling bad that the worsening economic news was going to make Up in the Air work even better?

A: I certainly never felt good about the fact that the world economy was crumbling. In fact, I had to re-write my screenplay because when I started writing it, the corporate firings were handled more as satire, I was right in the middle of an economic boom. And as things became more real, I had to take a more dramatic approach to the scenes.

Q: You found people who had recently been fired to perform on-camera?

A: I realized that I didn’t have enough experience to write these scenes accurately, so I decided to interview people in Detroit and St. Louis which were the two cities that got hit hardest and let them share their stories and then actually “fired” them on camera.

Q: On a lighter note, between this and producing Jennifer’s Body, you’re pretty much the king of Toronto this year. Does it feel good?

A: Someone called me the Prince; I guess I’ve moved up in the royalty. [Laughs] I thought it’d be nice to bring a film not only that I directed, but a film that I produced and that I helped get to the screen. Yeah, it’s pretty cool. And it’s nice to have a Midnight Madness film.

Q: Like Juno, Up in the Air played at Telluride and you got a really warm reception there. But how does it feel when it plays in front of a big room in a big city?

A: Well, Toronto, I consider to be the birthplace of my films. I’ve made three films and this is the third one to premiere here in the same theater on the same day at the same time — they are my audience. They’re the people that I think about while I’m writing, directing, and editing. I specifically make movies for them.

Q: There was a very specific moment in Up in the Air where you could have taken a very easy out — and you don’t. Did you have to fight for that moment?

A: Nope. I knew the ending of the movie very early on, basically when I decided to write it. Fortunately I was coming off of a film (Juno) that cost $7 million and grossed $230 [million]. I had an 800-pound gorilla and an actor who stood up for me 100 percent and it never came up.

Q:  George Clooney is probably a very good force to have on your side. I take it he was the only conceivable choice?

A: He was my first choice. And I couldn’t imagine anyone else playing the role and I’m very fortunate that he said yes.

Q: What did he bring that you didn’t expect?

A: I’m not sure what he brought that I didn’t expect … you know what, no, I do. He changes the set. He is such a lovely human being and he never leaves set. Everything people say about him is true and because of that, the set is very warm. He brought a level of vulnerability to the character that was necessary and was unlike anything he’d ever done in any other film.

Q: How much research did you do to understand frequent flyer culture?

A: I am an obsessive flyer, myself. I have flown over 100 thousand miles for the last three years, each year. Two years ago, I realized I wasn’t gonna to make my status so I took a flight from L.A. to Chicago on December 28, landed, got a pizza, and flew back home, just for the miles. I am obsessive about what seat I’m in, about how I go through security. I have my airline on speed dial, and the airports that I travel through a lot, I know them very well. So I was already quite familiar.

Q: Up in the Air has an optimism and a sentiment to it — but it’s never sentimental. How hard was it to find that balance?

A: This is the type of balance I go for in my films. I think I’m getting better at it. That’s certainly what I was going for on Thank You for Smoking and Juno, so I don’t really know how to describe how hard it is to achieve, except for the fact that it’s constantly on my mind and weighs into every decision I make from wardrobe to casting to the direction I give actors, to the editing. I am obsessed with kind of the fine balance of a drama that has laughs or a comedy that has very emotional moving moments. This is a movie about what is important to you and how tantalizing it is, the idea of escaping and having nothing.