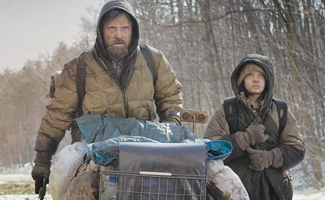 It was a beautiful day in Toronto on Monday but you’d never know it from the patrons who stumbled, ashen and shell-shocked, out of the afternoon screening of The Road, John Hillcoat’s adaptation of Cormac McCarthy’s acclaimed post-apocalyptic novel. In it, a father (Viggo Mortensen) and son (Kodi Smit-McPhee) travel the ruined earth trying to survive. Barren, bleak, yet ultimately hopeful, The Road‘s long-delayed trip to theaters has it playing here in Toronto; still, there was more than a little levity before the screening. Mortensen and Smit-McKee introduced the movie with an inside joke aimed at the hometown crowd.

Specifically, Mortensen and Smit-McPhee took to the stage wearing T-shirts — and in Smit-McPhee’s case, waving a small banner — with the logo of the Montreal Canadiens, the long-standing NHL rivals of the Toronto Maple Leafs. As the crowd laughed (and booed), Mortensen and Smit-McPhee put the movie in context. Smit-McPhee explained that the crowd wasn’t in for another journey through the end of days: “[The Road] is about a father and son and what they go through more than it’s about the end of the world.” Mortensen talked about the reactions he’s already gotten: “It’s not so much a heart-breaking story as it is a heart-opening story.”