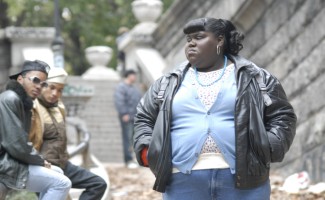 The Toronto International Film festival wound down Saturday night — and, between you and us here at AMCtv.com News, it’s been a busy ten days running from interviews to red carpet premieres to press conferences.

But even as Toronto got quiet on this last day of the festival, the
people spoke: The winners of the Cadillac People’s Choice Awards were
announced today. There
were many movies with strong promise going into the People’s Choice
Award balloting; some suggested that a sympathy vote would earn Heath
Ledger’s last film, Terry Gilliam’s The Imaginarium of Dr. Parnassus the prize (vote for your favorite Gilliam film here), while others thought Jason Reitman’s recession drama Up in the Air was a
strong contender. At the end of the day, though, the overall People’s
Choice Award had two runners-up — Mao’s Last Dancer and Micmacs — while the top prize went to Precious: Based on the Novel Push by Sapphire. Precious, which also won the audience award at Sundance, is the first film in history to win the audience honors at both festivals and marks it as a strong contender come
Oscar season.

New this year was a separate People’s Choice
award for the Documentary and the Midnight Madness categories. Daybreakers (featuring
Ethan Hawke as a conflicted ethical bloodsucker in a world ruled by
vampires) took the runner-up prize as the people’s choice after dark,
while the grand prize for the Midnight division went to The Loved Ones, a grisly, giddy high-school hell-ride from Australia that had the audience eating out of its bloodstained hand.

Need a refresher on what AMC News covered in the past week and a half? We caught Kat Dennings loading up in the gifting suites, sure, but we also spoke with Up in the Air director Jason Reitman, talked The Road with Viggo Mortensen and Kodi Smit-McPhee (and saw them prank the good people of Toronto) and chatted with Michael Douglas about aging disgracefully in Solitary Man. We also asked Drew Barrymore about the bone-breaking action of Whip It at her press conference and got some one-to-one time with Eve and Juliette Lewis about their roles as supporting skaters in that movie.

AMC News spoke to some director-actor duos who made waves, whether it’s the long-time partnership of Steven Soderbergh and Matt Damon at work in The Informant! or the new partnership between Colin Firth and Tom Ford for one of the festival’s biggest sales, A Single Man. Tilda Swinton talked about acting in I am Love while Jordan Scott, Ridley Scott’s daughter, told us about her directorial debut Cracks. We were there for the press conferences for George Clooney’s psychic comedy The Men Who Stare at Goats as well as the Robin Wright Penn romance The Private Lives of Pippa Lee.
The great thing is that we caught all those stars; the sad fact is
that still leaves plenty of movies we’ll have to catch up with (and
catch you up on) as they leave the glamour of Toronto and make their way
to theaters.