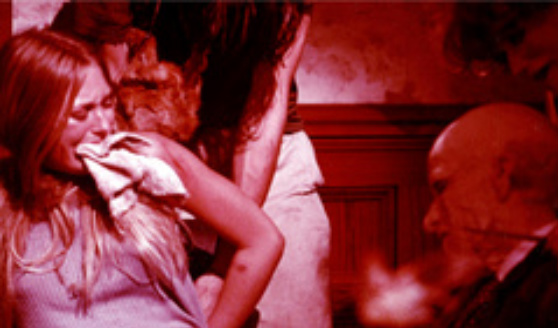 Way back when I was a doe-eyed innocent living at home, one way my parents and I would engage in “family bonding” was over horror movies. My mom and I would hit up New England Home Video and bring back some delightful tape that was sure to melt our brains as we sat in the living room munching on snacks. Though that particular video store is long gone, my parents and I continue the tradition and engage in scary movie madness whenever I’m home. It wasn’t until the Internet was born and I was able to connect with other genre fans that I learned that the Ponders weren’t the only ones who spent quality time together this way — most of my cyberpals say that they too were introduced to horror by mom and/or dad.

Plenty of families in horror movies partake in activities that bring them closer together, too. Of course, these activities usually involve murder, mayhem and madness. Here are ten cinematic families I sincerely hope do not resemble your own.

8. Just Before Dawn
As always, know-it-all kids ignore the warnings of a local elder and head on up into the woods for a weekend getaway. And as always, the local elder was right: The woods are dangerous! Or rather, the inbred psychotics inhabiting the woods are dangerous. Squirm writer/director Jeff Lieberman’s take on the slasher genre is shudder-inducing through and through. So remember, kids: Listen to your elders!

7. Frontiere(s)/Frontier(s)
If you like your horror exceedingly bloody, odds are you’ll like Frontiere(s), part of the new wave of French horror that pushes the boundaries of shock and gore. As riots break out during a contentious election, four young thieves flee the streets of Paris and stop at a run down bed and breakfast in the countryside. Unfortunately, the B&B is run by a family of sadistic neo-Nazis. Writer/director Xavier Gens (Hitman) wears his influences on his sleeve — he pulls bits from Chainsaw, Hostel and even Haute Tension/High Tension (by countryman Alexandre Aja, who went on to direct the Hills Have Eyes remake). The result is still enjoyable, if familiar.

6. American Gothic
This little-known picture showed up at the tail-end of slasher cycle. Yvonne DeCarlo (that’s Mrs. Munster, if you’re nasty) and Rod Steiger play Ma and Pa to a couple of “kids” on the other side of 40 who don’t act a day over six. Hey, I’m not here to judge — folks can act any way they want…. until they get homicidal, and then I draw the line. So when Ma, Pa and their “young-uns” start knocking off a group of travelers, I have to say “Enough is enough!” Mind you, I’ll watch every increasingly bizarre moment of this movie again and again.

5. Spider Baby
Exploitation maestro Jack Hill is behind this 1968 tale of the Merrye clan, three adolescents afflicted with a genetic disorder that causes sufferers to regress to a savage state. Their cannibalistic impulses are kept in check by their long-employed chauffeur (Lon Chaney, Jr.), but when distant relatives descend on their home, even he can’t stop the murderin’. Spider Baby is arguably Hill’s best work, and it’s unarguably a cult classic that well deserves that status.

4. Wrong Turn
In 2003, director Rob Schmidt revitalized the “deformed inbreds in the woods” subgenre with Wrong Turn, the story of a trio of cannibalistic siblings inhabiting a cabin in the remotest regions of West Virginia. Despite their aptly descriptive nicknames, like “Three Finger,” “One-Eye,” and “Snagglepuss” (OK, I made that last one up), don’t think these backwoods boys are total idjits — they’re hunters supreme, capable of setting traps and wielding a crossbow like nobody’s business, as the dumb young people who take the inevitable ill-considered detour learn.

3. House of 1000 Corpses/The Devil’s Rejects
Love him or hate him, you can’t say that Rob Zombie doesn’t know how to make an impression. These two movies, which chronicle the exploits of the homicidal, rambunctious Firefly clan, are as infused with frat boy humor as they are with grue. Short on logic and long on an exploitation vibe, Corpses and Rejects are nothing if not viciously original in this age of watered-down horror.

2. The Hills Have Eyes
The “eyes” in both Wes Craven’s 1977 original and Alexandre Aja’s 2006 remake belong to members of Papa Jupiter’s extended family, cannibalistic, radiation-deformed mutants (aren’t they always?) who prey on regular families who wander too far into the desert hills. Each movie is an exercise in depravity and revenge — classic drive-in fodder.

1. The Texas Chainsaw Massacre
The size of Leatherface’s family tree depends on your taste as a viewer — do you prefer original recipe, or the zesty remix? In the original, you never learn much about the cannibalistic wackadoos populating that remote farmhouse beyond the fact that… well, they’re a family of cannibalistic wackadoos who enjoy gathering ’round the table come suppertime. Sure, we can piece together a little something here and there: The local slaughterhouse used to employ several family members and at least one brother (“Old Man”) has it sufficiently together enough to run a business — the scuzzy local gas station/BBQ-ery. The remake fleshes out the original (if you’ll excuse the expression) to expand on those family ties, even providing Leatherface with a proper name: Thomas Hewitt. I personally think this detracts from the mystique, but you may feel otherwise.

I take comfort in the fact that my family might be a little kooky, but we’re not irradiated mutants who eat our neighbors or strangers who make the mistake of wandering onto our street. We’d rather just watch fictional families carry on that way, which totally isn’t weird at all!