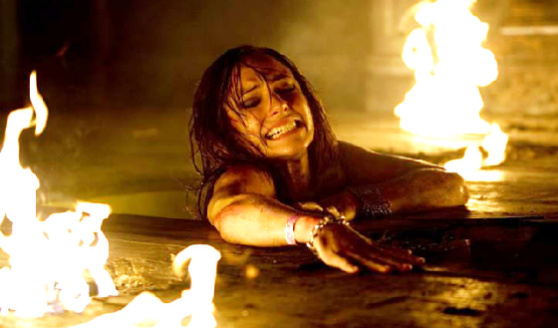 There are things we all love: Chocolate, puppies, William Shatner singing “Rocket Man,” and of course, sorority slasher flicks. The latest entrant to that last category, Sorority Row, hits theaters on September 11. Two things matter in slasher flick: The “Who could the killer be?” face-covering and the signature killing weapon. This time out, the face covering is a trite hood and cloak (hello? Scream?), but the weapon is a tire iron. That’s right, a tire iron — and that earns Sorority Row four stars before the opening credits roll.

To celebrate the opening of this latest in a long line of movies that feature the systematic slaughter of scantily clad co-eds, let’s take a look at the Top 10 Sorority Slasher Flicks of all time.

10. The Initiation (1984)
This flick was a stepping-out role for Daphne Zuniga, who prior to it, only had a minor part on Family Ties. Zuniga was also Princess Vespa in Spaceballs, for which she earns a free pass for anything she chooses to do for the rest of time — and she needs that pass for this 1984 stinker. Not much reason to add this to the Top 10 list other than that sororities have initiations, and “The Initiation” just sounds frightening. But then again, so does my stomach after chowing down on three poorly-cooked Sheboygan Brats at a tailgate party. Fear is relative, my friends!

9. Delta Delta Die (2003)
If you’ve ever followed a cake recipe only to have the result look less than the picture on the box than that green crap the mom served up in Better Off Dead, then you know at first hand that even time-tested formulas can go horribly wrong. Case in point: Delta Delta Die. You’d think a cannibal sorority movie would be a win-win, but you’d be wrong. So why did it make the list? Because that title is way strong. Even if you can find it, you don’t need to watch this one — just know that Uncle Scottie took one for the team.

8. The Hazing (2004)
This movie gets high honors just for having one of the coolest posters ever. Sure, any design that features a sexy girl in a Playboy bunny teddy and white fishnet stockings gets props from Uncle Scottie, but have that same girl holding a chainsaw? Done deal. The acting? Freakin’ awful. FX? Even worse. A demon possesses an empty house, and our college-age redshirts enter, and… come on, do I even need to discuss the plot? I think you’ve heard it all before. Oh, did I mention the movie poster?

6. The Initiation of Sara (1978)
Yeah, it’s a made-for-TV movie (that was re-made into another made-for-TV movie), but hell, if you’re talking sorority horror you just have to include this one. Sure, sorority movies have serial killers, bowling-trophy imps, tentacle boobies and even chainsaw-wielding Playboy bunnies, but how many have unpopular, telekinetic psycho girls desperate to wreak havoc on rival sororities? Just this one, baby, just this one. Oh, and the cheesy keyboard music is totally bitchin’.

5. Sorority Babes in the Slimebowl Bowl-O-Rama (1988)
There’s no need for me to explain this choice: The title says it all. Sorority babes and bowling? That’s like pounding ten white Russians with The Dude and then heading out to the strip club. Oh, the plot? Something about an imp trapped in a bowling trophy that — when set free — grants wishes. Much evil ensues, as does big ’80s hair, some Spandex and neon fishnets. Fire up your “Best of RATT” album and rock out.

4. Sorority House Massacre 2: Nighty Nightmare (1990)
In true Greek society fashion, this one is legacied in thanks to No. 3, below.

3. Sorority House Massacre (1986)
Come on, baby, you know you want it — it’s got the words “sorority house” and “massacre” right in the title! And look at you, all dressed up in that sexy negligee, posing all lurid for the VHS cover. That’s right, you’re just begging for it. OK, this analogy has gone so far I’m even creeping myself out, so let’s just hit the breaks. Sorority House Massacre? Freakin’ classic example of copycat slasher action. Plot? Well, there’s a sorority house that contains hot giggly college girls of questionable moral standing and they get massacred. Any questions? I didn’t think so.

2. The House on Sorority Row (1983)
Maybe you guessed from the title that this is the original upon which the upcoming Sorority Row is based. It’s considered a classic among low-budget slasher flicks, which is kind of like saying Spam is considered “classic” among the low-budget canned meat products. A prank-gone-awry leaves the sorority house mother dead from a gunshot wound. In typical movie decision-making fashion, the girls decide to hide her body in a dirty swimming pool so they can party! Unfortunately someone, or some thing (dun-dun-dunnnnn) stalks the girls and ends their party-hearty spirit the hard way, one at a time.

1. Black Christmas (1974)
One of the founding classics of the sorority slasher tradition, Black Christmas features a serial killer stalking sorority girls in their house over Christmas break. Truly a cult classic, and also an early example of the “Interesting and Different Ways to Kill People” school of horror-movie making. Glass unicorn, anyone? Oddly, though When a Stranger Calls is famous for the line “The call is coming from inside the house,” Black Christmas used that same device a full five years earlier. Black Christmas was remade in 2006, but why bother discussing that? The original is the stuff of horror movie legend.

Rush! Rush! Rush!
Now I’m sure some of you take issues with the movies I left off this list. First, remember that this is about sororities, not fraternities or co-ed societies. So comment me up and let’s see what we missed. Until then, check out Sorority Row on Sep. 11 and let’s see if it takes its place on this list.

New York Times best-selling author Scott Sigler writes tales of hard-science horror, then gives them away as free audiobooks at www.scottsigler.com. His novel INFECTED was named as the Border’s #1 mystery, thriller and horror novel for 2008. His next major hardcover horror/thriller ANCESTOR