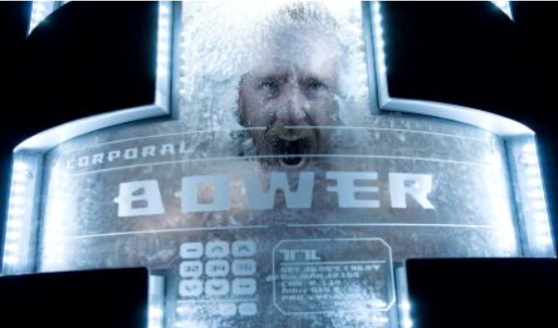 A Franken-fright flick cobbled together from chunks of Battlestar Galactica, The Descent, Serenity, Cube, Resident Evil, Event Horizon and, of course, Alien, German director Christian Alvart’s Pandorum is an efficient scare machine as long as you can ignore the naked contrivances required to keep the cogs turning.

The year: 2174. Having overpopulated the Earth, mankind builds a massive ark called Elysium and points it toward a distant planet called Tanis that appears miraculously fit for human habitation. Its precious cargo: 60,000 soldiers, scientists and regular folks, most of whom will dream away the flight in hypersleep tubes while rotating skeleton crews keep the Elysium on course and running.

Fast-forwarding now, Corp. Bower (Ben Foster) and Lt. Payton (Dennis Quaid) wake up with their skin peeling off in ghastly white strips, their memories riddled with holes and their heads full of questions. Where are they? How long have they been asleep? Why is it so damned dark? How come the door to their hypersleep chamber is locked tight and scarred with scratches? Why do the ship’s systems keep coming on with a nerve-jangling jolt, then shutting down again? And where’s Cooper, the missing third member of their team, who’s neither in his sleep tube nor anywhere in the sealed room? For that matter, where is everybody.

Payton and Bower, who realizes there’s something seriously wrong with the ship’s nuclear reactor power source, come up with a plan: Bower will head into the ventilation ducts and find his way to the reactor chamber, while Payton, who’s gotten the computer bay up and running, stays behind to guide Bower through the ship’s labyrinthine corridors and security checkpoints. At this point Pandorum effectively becomes two movies.

The first is all head games — after calmly talking Bower through claustrophobia, disorientation and general panic, Payton loses contact with his only connection to whatever’s going on outside and starts getting wiggy. The situation takes a turn for the worse when he finds a blood-streaked naked dude (Cam Gigandet) tangled up in a slimy mess of tubing in an overhead duct. Payton can’t enjoy his company because naked guy keeps yammering about “pandorum,” a virulent form of cabin fever that makes people go bughouse crazy.

The second is all video game-style action — no surprise given that the movie’s producers come from the Resident Evil franchise. Plucky Bower fights his way through increasingly dangerous levels of cannibal-monster terror, accumulating a ragtag team of fellow survivors along the way. There’s the muscle-bound Asian guy (Cung Le) from the agricultural unit with mad martial arts skills; the smokin’ hot geneticist (Antje Traue) in biker-babe leather; and the crazy-ass black guy (Eddie Rouse) who, when not telling apocalyptic fables about how things came to this sorry state, claims to know the way to the reactor room. But enough about the so-called characters: Let’s get to the mutants. Allowing for the fact that they’re 50/50 hybrids of Serenity‘s bestial Reavers and The Descent‘s albino CHUDs, they’re pretty effective scuttling, shrieking, flesh-eating, tearing victims limb-to-limb hellspawn, good for keeping humans on the run.

Alvart is a slick director and his first feature, Antibodies, was a pretty good synthesis of post Silence of the Lambs serial killer movie tropes. The trouble with Pandorum, which he co-wrote with Travis Milloy, is that it’s mechanical. There’s no Ripley to care about — there isn’t even an Alice, the zombie killer Milla Jovovich plays in the Resident Evil movies. Without someone to root for, it’s all creepy-cool set design and some standard-issue scares.