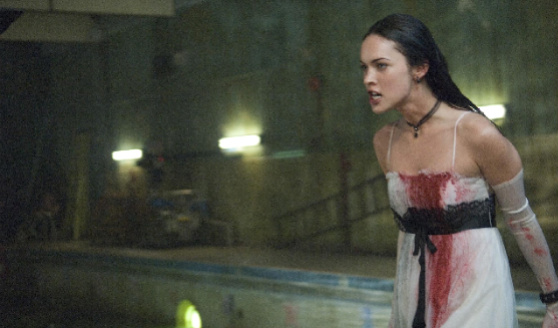 What are those strange drops of blood on Jennifer’s body? OK, the Giallo geek in me couldn’t resist, and to be honest, they’re less like drops than pools of blood. But I’m getting ahead of myself.

“Hell is a teenage girl,” observes Anita “Needy” Lesnicki (Amanda Seyfried) in Karen Kusama’s Jennifer’s Body. Needy has more than earned her nickname through years of playing Betty to Jennifer Check’s (Megan Fox) bitchy, vixenish Veronica. It’s always been the two of them against the small-town world, bantering in their own slang (a variation on writer Diablo Cody’s Juno-speak) and thrilling to the fact that their friendship (toxic though it may be) baffles the cliquish sheep who can’t see beyond labels like “cheerleader” and “science geek.” Without bossy Jennifer taking the lead, Needy’s life would be a whole lot duller. Jennifer is well on her way to being too hot for their tiny hometown (pop. 7083) to handle, even if it is named Devil’s Kettle. But as long as Jennifer sticks around, Needy is happy to tag along, even it means going to a backroad dump because Jennifer is crushing on the lead singer of Low Shoulder, some cooler-than-thou indie band she saw on MySpace.

Of course, that particular adventure doesn’t turn out so well: The bar is destroyed in a freakish fire that litters the charred ground with grotesquely burned corpses, and Jennifer follows cocksure rocker Nikolai (Adam Brody, of TV’s The OC) into the band’s grody van, only to reappear hours later blood-streaked, bedraggled and vomiting black goo.

Jennifer seems fine the following day; in fact, she looks even better than usual, aglow with feral energy that draws boys like moths to a flame. Only Needy notices that those very same boys are the ones who show up later as cannibalized corpses. But who would believe that Jennifer has crossed the line from high-school evil into real evil?

Jennifer’s Body is one big in-your-face metaphor: Jennifer is a man eater and Needy is the kitten who finds her inner whip. (And no, that’s not a spoiler: When we first meet Needy she’s already in a lockdown facility, cultivating her inner Buffy in solitary confinement.) That might be a bad thing, if Seyfried and Fox weren’t so perfectly cast, though in entirely different ways. Seyfried is a good enough actress not to play Needy as the stereotypical nerd, a pretty teenager working out the balance between brains and beauty. In another kind of teen movie she’d have come to her 10th high school reunion a brilliant, mediagenic celebrity, saddened but not surprised to find her former BFF a blowsy, trailer-park trollop. As for Fox, she wears her assets like high-priced hood ornaments, and that’s the essence of Jennifer — the movie is, after all, called Jennifer’s Body, not “Jennifer’s Brains.” She’s a girl who’s smart enough to know she needs to exploit what she’s got while she can, but not savvy enough to formulate a strategy.

Is Jennifer’s Body scary? Not particularly, but it’s got a handful of seriously creepy moments — director Kusama (Girlfight) either knows her horror movies or studied up. Funny? More clever than funny ha-ha, and certainly not a horror comedy the way Fright Night is a horror comedy. And I don’t think it’s meant to be: It’s the movie a certain type of smarty-pants horror buff cooks up while ticking off the clichés in some grade-Z slasher. And Cody’s pop culture sensibility produces some off-kilter moments that stick around long after the gore and shadows have faded. Watch Amy Sedaris’ scenes as Needy’s pious, careworn mom; or the moment when meek little Chastity (Valerie Tian),  suddenly whips around in her seat as Needy dares suggest that Low Shoulder, now on the talk show circuit, is riding the tragedy to fame and fortune. “We need them more than ever,” Chastity hisses with the intensity of a Lehman lifer hearing those first whispers about an impending Wall Street meltdown. Few things are as scary as misplaced faith, or the true believers who cling to it because really, what else do they have?

For an alternate opinion, check out AMC Filmcritic.com.